"Batman: Year One" a Dark Knight That Actually Rises 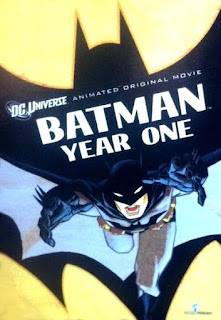 Batman: Year One is a 2011 direct-to-video superhero animated film from Warner Bros. Animation. Starring the DC Comics character, Batman, this is also the 12th feature in the DC Universe Animated Original Movies line. Executive produced by Bruce Timm, this film is adapted from the “Batman: Year One” story arc written by Frank Miller (300) and drawn by David Mazzuchelli and originally published in the comic book series, Batman #404-407 (February to May 1987 cover date).

As the film opens, Bruce Wayne (Ben McKenzie) returns to Gotham City after a 12-year absence from his hometown. Meanwhile, policeman detective James Gordon (Bryan Cranston) and his pregnant wife, Barbara (Grey DeLisle), move to Gotham from Chicago. Gordon quickly discovers how corrupt the Gotham City Police Department is after meeting his new partner, Detective Arnold Flass (Fred Tatasciore), who savagely assaults civilians and accepts bribes from the mob. Commissioner Gillian B. Loeb (Jon Polito) seems more like a kingpin of crime than a police commissioner.

Bruce Wayne has decided to fight the street crime that took his parents lives and to put an end to the corruption of the city’s elites. Wayne’s first mission in his war on crime goes badly, but he is soon inspired to put on a weird costume that strikes fear into the hearts of criminals. Soon, the media is calling this mysterious vigilante figure, “The Batman.” Inspired by The Batman, Selina Kyle (Eliza Dushku), a prostitute, puts on a costume and becomes The Catwoman.

After watching the first 10 minutes of Batman: Year One, I didn’t hold out much hope that it would amount to much. However, it turned out to be a very entertaining film. The animation is good, not great, but the script is excellent. The writing captures the motivations of the characters and hits the conflicts dead center. It makes clear the reasons for disputes and the consequences that will result depending on how these clashes are settled. The conflicts, personal strife, and internal battles drive the drama in Batman: Year One.

When it comes to Batman: Year One, the Dark Knight rises, indeed.

Posted by Leroy Douresseaux at 7:45 AM