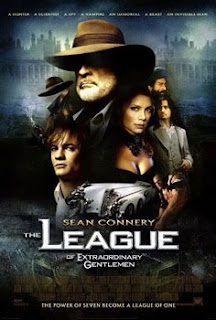 The League of Extraordinary Gentlemen may have an unusual name, and the advertising for the film may leave you dumbfounded, wondering just what the heck this film is about. Don’t fret. The plot is not that important. LXG (the title abbreviation, a thing that is so trendy and important for action films these days) is a simple, lumbering beast that is mildly entertaining, if you set your sights low enough. It’s not the dumbest of action pictures, and maybe it isn’t at all dumb, just not special, but it could have been. Sadly, it’s a by-the-numbers rendition of a concept that could have been so much smarter and more unique than most summer movies, but director Stephen Norrington and screenwriter James Dale Robinson, a former comic book writer, stay the course and make a standard action thriller that’s set in a non-standard action movie world.

It’s 1899; the British Empire is in trouble, and the rest of the European powers with it. The colonialist, imperialists bastards, it would serve them right to die for the genocide and cultural destruction they reigned across their empires in the Americas, Africa, and Asia. However, for the sake of the movie, the British crown and Europe must be preserved lest millions of innocent lives be destroyed, at least, that’s what the protagonists keep telling the audience. It seems an evil warmonger named The Phantom is using advanced weaponry like tanks to ferment war fever. Mycroft Holmes (Richard Roxburgh), some high muckity-muck in the circles of British power gathers a band of special people to battle the Phantom. Mycroft wants to form a league, and the special people he gathers for his team are people we, who read a fair bit, will recognize as famous literary characters from the 1800’s.

The leader of the group is the adventurer, Allan Quatermain (Sean Connery), the same character Richard Chamberlain played in two 1980’s movies. A hero of turn-of-the-century English fiction, Quatermain was kind of a precursor to Indiana Jones. Other literary characters who spring to life in this film are Mina Harker (Petra Wilson) from Bram Stoker’s Dracula, Captain Nemo (Naseeruddin Shah) of Twenty Thousand Leagues Under the Sea, Dorian Gray (Stuart Townsend) from writer Oscar Wilde’s The Picture of Dorian Gray, Doctor Jeckyll and Mr. Hyde (Jason Flemyng) of the famous novel of the same name, and Rodney Skinner (Tony Curran), a man who is invisible like the character from The Invisible Man. The studio added Tom Sawyer, Mark Twain’s famous juvenile, who is now an adult and a Secret Service agent. Together they form The League of Extraordinary Gentlemen.

The movie is pretty much a standard thriller with lots (and I do mean lots) of explosions and gunfire. It all seems a bit out of place. LXG is really a period adventure, set in the 19th Century with lots of 19th Century architecture and lavish period costumes. With all these literary characters, you’d think that the film would have been a little more thoughtful and imaginative. In the end, the story is so much like other noisy movies. LXG is based on the comic book The League of Extraordinary Gentlemen by Alan Moore and Kevin O’Neill, and that comic stood out because it was so different from other comics featuring heroes with special powers, knowledge, or abilities. Obviously, the comic’s uniqueness and concept wowed Fox Studios, so what do they do? They buy the film rights to the comic and promptly turn it into another pedestrian fast food film for the fickle masses.

These characters might be called “extraordinary,” but they are really quite dull and mundane. Allen Quatermain is so boring that it’s best to ignore the character. Just think of the League as seven freaks and Sean Connery dressed in raggedy clothing. Take The League of Extraordinary Gentlemen for what it is and not for what it could have been; in the end, I liked it the way I sometimes like trashy food. Dog knows I went in expecting so very little. It’s clear the director and writer were too clueless to do something special, but even the heavy handed predictability can be entertaining at times, about as often as not, just another movie that’s a not too painful way to kill two hours.