"In Time" is Timely and Right on Time 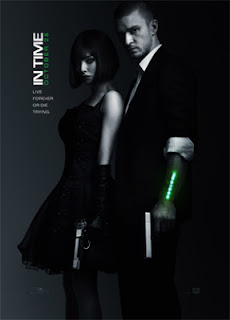 SCI-FI/DRAMA with elements of action and crime

In Time is a 2012 science fiction drama from writer-director Andrew Niccol. The film stars Justine Timberlake as a fugitive in a future where time has replaced money as the currency that determines life and death.

In Time opens in the year 2169. In this world, people are genetically engineered to stop aging at 25, but they live only one more year after they turn 25. People can extend their lives by earning time, instead of money, for their labor, and the amount a time people have is displayed by a digital clock implanted in their forearms. However, that live-saving time must also be used to pay bills, debts, cost-of-living expenses, etc. Society is divided into specialized towns called “Time Zones,” that reflect class, wealth, and status. The super-rich have been able to obtain enough time to practically live as immortals in Time Zones like New Greenwich.

Will Salas (Justin Timberlake) is a 28-year-old factory worker living in Dayton, a ghetto Time Zone. A chance meeting with 105-year-old Henry Hamilton (Matt Bomer) changes Will’s life, but tragedy strikes immediately after his windfall. Accused of murder, Will goes on the run, pursued by Raymond Leon (Cillian Murphy), a cop called a “Timekeeper.” Will takes a hostage, New Greenwich resident, Sylvia Weis (Amanda Seyfried), and he is determined to destroy the system that makes the poor slaves to time and the wealthy masters of it.

Andrew Niccol is the director of one of my all-time favorite films, Gattaca (1997). Niccols’s work sometimes uses science fiction and fantasy settings, elements, and themes to tell stories concerning societal or political issues. In Time can be viewed as an allegorical tale about the increasing concentration of vast amounts of wealth in the hands of a relatively small group of people, happening in our own time. Call the time-wealthy this movie’s “the 1%.” In Time essentially addresses the naked greed of the modern financial class and Wall Street types that manipulate financial markets entirely for their benefit, regardless of how many people are left hungry, homeless, and destitute.

Lest you think In Time is heavy-handed, Niccol is clever in the way he uses familiar genres or elements to make his film entertaining and not strident or didactic. The relationship between Will and Sylvia recalls such true crime romance as Bonnie and Clyde, with Will also acting as a kind of Robin Hood. The characters Will and Sylvia are thematically similar to another pair of fugitives, Logan 3 and Jessica 6 of the novel, Logan’s Run.

All these citizens-turned-outlaw fugitive elements make In Time a crime fiction treat, while Justin Timberlake and Amanda Seyfried make In Time dark and sexy. With them onscreen the majority of the runtime, In Time is never boring, and they actually bring clarity to Niccol’s concepts, ideas, and themes. Seyfriend can do sexy-but-dangerous as well as any young starlet; she’s like an irresistible, gourmet chocolate treat that might hide at least one razorblade (but you never know). Timberlake is a good, but not great actor, but he is a movie star. He sells this movie. Niccol is lucky to have them. This duo makes sure that In Time is on time when speaking about these times in which we live.

Posted by Leroy Douresseaux at 11:17 AM