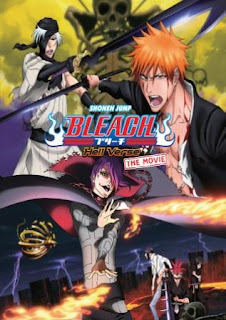 Soul Reaper Ichigo Embarks On A Perilous Mission To Hell To Rescue His Younger Sister In New Anime Feature Film Also Launching On DVD And Blu-ray!

VIZ Media, LLC (VIZ Media), the largest publisher, distributor and licensor of manga and anime in North America, delivers the supernatural anime action of the latest Bleach feature film to fans with the premiere of BLEACH THE MOVIE: HELL VERSE on Neon Alley on Sunday, November 25th at 8:00pm EST / 5:00pm PST. The film will repeat 12:00am EST November 26th / 9:00pm PST November 25th, and will air again throughout the week.

Bleach the Movie: Hell Verse will also be released on DVD and Blu-ray on December 4th with both English-subtitled and dubbed dialogue options. The new film carries a DVD MSRP of $19.98 U.S. / $24.98 CAN and a Blu-ray MSRP of $24.98 U.S. / $27.50 CAN. Bonus features include the original Japanese theatrical trailer.

Neon Alley is VIZ Media’s new 24-hour, subscription-based anime channel featuring the world’s best titles (dubbed in English and uncut) and presented in HD (when available) for a low monthly subscription rate of $6.99. Neon Alley is the first platform designed to be studio agnostic, offering with a diverse array of titles from many leading anime producers and distributors. For a limited time only, the game console based-service is offering a one-week free trial, available for fans who sign up at NeonAlley.com.

Bleach the Movie: Hell Verse (rated TV-14) takes audiences on a wild trip to the underworld – a place where beings that have committed mortal sins during their lifetime are sent. It is a realm where even Soul Reapers are forbidden to interfere. When a group of vicious Sinners plots to escape from this eternal prison, they discover that Substitute Soul Reaper Ichigo Kurosaki is the key to their freedom. The Sinners launch an attack and in the process kidnap Ichigo’s younger sister Yuzu and take her to Hell. With the help of a mysterious man named Kokuto, Ichigo and his friends must now travel into the depths of Hell to stop the Sinners and save Yuzu, unaware that their actions could bring Hell to the World of the Living.

“ Bleach the Movie: Hell Verse is the fourth feature film of the popular Bleach movie franchise and based on the smash hit manga series originally created by Tite Kubo,” says Brian Ige, Vice President, Animation. “Ichigo will face his most dangerous adversaries yet as he journeys to the underworld on a perilous mission to save his sister. Don’t miss this special North American movie premiere on our new digital anime platform this coming weekend!”

The Bleach animated films and TV series follow the adventures of Ichigo, a 15-year old student with the ability to see ghosts. When his family is attacked by a Hollow — a malevolent lost soul – Ichigo encounters Rukia, a Soul Reaper, and inadvertently absorbs her powers. Now, he’s dedicating his life to protecting the innocent and helping tortured souls find peace.

Bleach is a tremendously successful multimedia property internationally. The manga has been licensed to more than a dozen countries and has sold over 50 million copies in Japan alone. In North America, the manga has been a sales hit and the popular animated series (both rated 'T' for Teens) is viewed weekly by millions in the United States and Canada. This success has further spawned an array of related video games, apparel, action figures, trading cards and other merchandise.

Subtitled episodes of Bleach also may be streamed on the company’s own free-to-use VIZAnime.com, as well as on Hulu. In addition, Download-To-Own dubbed episodes are available for purchase through iTunes®, PlayStation®Network, Xbox Video, Amazon Instant Video, and the Google Play store.

Posted by Leroy Douresseaux at 7:39 AM