Review: "Skyfall" is Among the Best Daniel Craig James Bond Films... so far 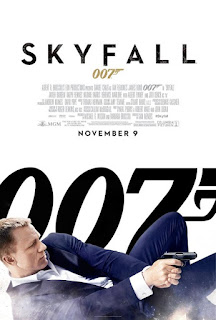 As the film opens, MI6 agents James Bond (Daniel Craig) and Eve Moneypenny (Naomie Harris) are in Turkey where they are tracking a killer named Patrice (Ola Rapace). This mercenary has in his possession a computer hard drive containing highly-sensitive information that belongs to the British, but the mission goes badly.

Later, Bond’s superior, M (Judi Dench), comes under political pressure to retire, even as MI6 comes under attack. With his credibility and ability to perform under question, Bond sets out to discover the identity of the attacker. What he finds is that M’s past has come back to haunt her in the form of a mysterious figure known as Raoul Silva (Javier Bardem). As 007 tracks down the threat, he finds himself facing his own past, but he must destroy that threat no matter how personal the cost.

I don’t think that there is much to say. Skyfall is good, and it is the best James Bond movie in recent memory, and certainly one of the best Bond films ever. It is well-directed with bracing action set pieces and thrilling scenes that, quite frankly, enthralled me. The performances are good, especially Javier Bardem as Raoul Silva; surely, he should at least be considered for an Oscar nomination.

The film is well-written, but I wouldn’t say that it is much better written than any of the other Daniel Craig Bond films. Most of the first hour of Skyfall is testament to brilliant spy thriller screenwriting. Once the film moves to London (because the story is resolved in Great Britain), it loses some of its mojo. It is not that Skyfall turns bad. It simply slows from a genius pop confection and transitions into a highly-skillful, espionage, shoot-‘em-up, action flick.

That’s not much of a fall, but it is still a step down from the near-perfection that opened Skyfall. Anyway, no one who has every enjoyed a James Bond film should miss this. Plus, I saw Skyfall in digital, and the picture sure was pretty.

Posted by Leroy Douresseaux at 1:20 PM