"The Expendables 2" Darker, But Still Fun 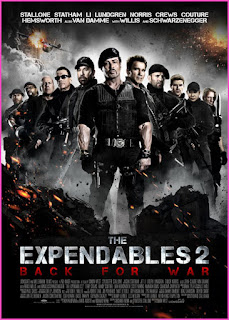 The Summer 2010 movie season offered an unexpected treat, The Expendables, an explosive action film co-written, directed, and starring Sylvester Stallone. It was a throwback to the macho, testosterone-fueled, action flicks of the 1980s.

The subject of this movie review is its sequel, The Expendables 2, a 2012 action movie from director Simon West. Like its predecessor, The Expendables 2 is not an homage to or parody of action movie days-gone-by. It is an authentic ass-kicking, ass-stabbing, cap-popped-in-ass action movie, but it is a little darker and more downbeat than the original.

Soon, the Expendables are escorting one of Church’s operatives, Maggie Chan (Nan Yu), to a crash site in the Gasak Mountains, Albania. The item that the Expendables are trying to retrieve is also the target of Jean Vilain (Jean-Claude Van Damme), the leader of a large mercenary band called the Sangs. After one of the Expendables is brutally murdered, Ross leads his team into hostile territory on a mission of revenge.

Early in The Expendables 2, even with the crazy opening in Nepal, it is obvious that this is a darker movie. This sequel replaces the cartoonish and stylish violence with more grit. It seems that just as many, if not more people are casually shot and also shot to pieces, but there is something meaner here. Perhaps, it is this film’s chilly shooting locations in Bulgaria, or maybe it’s the story.

More than the original film, The Expendables 2 is a Sylvester Stallone movie, and the theme, or at least emphasis, is that his character, Barney Ross, has come to a morbid conclusion about his life. He’s a tired, old soldier, but this dog still has a lot of fight in him. But Ross is simply determined not to drag any new people into the meat grinder that is his place of work and profession. The other Expendables are largely in the background compared to the first movie, which is hugely disappointing to me. Still, wise-ass Jason Statham gets many opportunities to spread his wings of sarcasm, and he has some cool, solo martial arts fight scenes. That’s worth the price of admission.

Stallone and some of his costars are starting to look real hoary because of plastic surgery. In fact, there is enough plastic surgery between some of them that it would not be too snarky to say that they are starting to look like action figure toys. Anyway, if you liked the first movie, you’ll likely like the second. The Expendables 2 is good enough to make me ready to go on a third mission with Ross and company.