Naruto Shippuden: The Will of Fire Streams Tonight 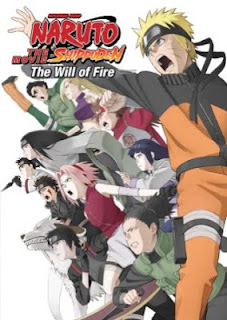 VIZ MEDIA DEBUTS NARUTO SHIPPUDEN THE MOVIE: THE WILL OF FIRE ON NEON ALLEY

The world’s most popular ninja returns to face a menacing new threat in the Neon Alley debut of NARUTO SHIPPUDEN THE MOVIE: THE WILL OF FIRE (rated TV-14) on Sunday, November 4th at 8:00pm EST / 5:00pm PST. The film will repeat at 12:00am EST November 5th / 9:00pm PST November 4th, and will air again throughout the week.

Neon Alley is VIZ Media’s new 24-hour anime channel featuring the world’s best titles (dubbed in English and uncut). For a limited time only, the subscription-based service is offering a one-week free trial, available for fans who sign up at NeonAlley.com.

NARUTO SHIPPUDEN THE MOVIE: THE WILL OF FIRE is also now available on DVD and Blu-ray with both English-subtitled and dubbed dialogue options. The film is carries a DVD MSRP of $19.98 U.S. / $24.98 CAN and a Blu-ray MSRP of $24.98 U.S. / $27.50 CAN. Bonus features include the original Japanese theatrical trailer.

In the film, four ninjas with Kekkei Genkai justsu abilities that have been guarding the Hidden Villages of Cloud, Stone, Mist and Sand mysteriously disappear from their respective villages. The Land of Fire comes under suspicion as it is the only country to have suffered no loss. Mounting suspicion among the four countries could potentially set off the 4th Great Ninja War. In the Hidden Leaf Village, Tsunade orders her men to keep strict guard and to try to find out what really happened. At the same time, it turns out that Kakashi has left the village. The bad news deeply disturbs Naruto and his friends.

Created by Masashi Kishimoto, NARUTO was first introduced in Weekly Shonen Jump magazine in Japan in 1999 and quickly became that country’s most popular ninja manga targeting tweens and teens. The manga series (rated ‘T’ for Teens, in print and digital editions) and animated counterpart (NARUTO rated ‘T’ for teens, and NARUTO Shippuden rated ‘T+’ for older teens) are some of VIZ Media’s most successful properties and have captivated millions of fans across North America, Europe and South America. NARUTO is a co-production of TV TOKYO, VIZ Media parent company Shueisha Inc., and Pierrot Co., Ltd.

More information on NARUTO and NARUTO SHIPPUDEN is available at www.Naruto.com.

Subtitled episodes of NARUTO and NARUTO SHIPPUDEN may be streamed on the company’s own VIZAnime.com and Hulu. In addition, Download-To-Own dubbed episodes are available for purchase through iTunes®, PlayStation®Network, Xbox Live®, Amazon Instant Video, and the Google Play store.