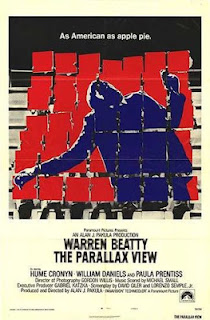 DRAMA/MYSTERY with elements of thriller

The subject of this movie review is The Parallax View, a 1974 drama and political thriller directed and produced by Alan J. Pakula. The film is based on the 1970 novel, The Parallax View, which was written by Loren Singer. While David Giler and Lorenzo Semple, Jr. are credited as the film’s scriptwriters, acclaimed screenwriter, Robert Towne, also contributed to the screenplay, but did not receive screen credit.

Joseph Frady (Warren Beatty) is the kind of rash and reckless reporter who needs to defend his reputation, both to colleagues and to his editor. So when a colleague comes to Frady and tells him that all the reporters who witnessed the assassination of a leading U.S. Senator are being murdered, even he is skeptical. The reporter was a witness, and she is frantic with fear that someone is out to murder her. After her mysterious death, Frady comes to believe there is some truth to the story. His investigations leads him to a shadowy and nebulous conspiracy involving an enigmatic therapy institute called The Parallax Corporation. Frady infiltrates Parallax to become a patient, unaware of how much they know about him.

The Parallax View is a fairly good suspense thriller with a good take on conspiracy theories. Director Alan J. Pakula uses lots of long tracking shots that follow the action and film narrative from a great distance. This heightens the film’s sense of mystery and confuses the audience in such a manner that they can sympathize with Joe Frady’s confusion. The film has many twists and turns, and often the audience must wonder who knows what. How successful has Frady’s infiltration of Parallax been, and who is the hunter and who is the hunted?

The film’s major flaw is flat and stiff acting that sticks with the movie until the last act, and the Parallax Corporation itself seems like a B-movie convention or the kind of trite villain found in potboiler fiction. Still, The Parallax View is a good movie about bureaucratic intrigue, government chicanery, and especially makes a good point about the intervention in political affairs by mysterious and private interests. I highly recommend this to conspiracy theory fans.