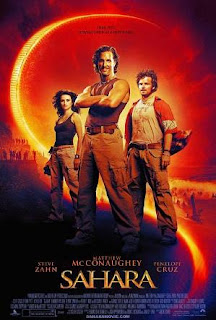 ACTION/ADVENTURE with elements of comedy

The subject of this movie review is Sahara, a 2005 comedy-adventure and action film starring Matthew McConaughey and directed by Breck Eisner. The film is based on the 1992 novel of the same name by author Clive Cussler and is the eleventh book in Cussler’s Dirk Pitt book series.

Master explorer Dirk Pitt (Matthew McConaughey) is searching for a Confederate iron clad ship no else thinks exists. When he finds a fabled Confederate gold coin linked to the historical legend, his hunt takes him through some of the most dangerous regions of West Africa in the rousing adventure film, Sahara.

While searching for the long-lost Civil War battleship, the Texas, that African locals call the “Ship of Death,” Dirk and his wisecracking long-time sidekick and best pal, Al Giordino (Steve Zahn), meet Dr. Eva Rojas (Penelope Cruz), a doctor from WHO (the World Health Organization) looking for the source of a plague that is killing people in Niger. Her quest coincides with Dirk and Al’s search, and she joins their traveling party for a bit before going her separate way in Mali, a country that borders Niger. After a warlord named General Zateb Kazim (Lennie James) launches an assault on their boat in his hunt for Eva, Dirk and Al temporarily abandon their quest to find and protect Eva, endangered because her quest to learn the mysteries of the plague interferes with Kazim’s power. Together, the trio discovers an environmental catastrophe, battle Kazim and his forces, and survive the desert terrain of Northwest Africa on the way to getting to the bottom of both mysteries.

Sahara is a fun action adventure – aesthetically similar to The Mummy, but not quite as fun. The film’s hero Dirk Pitt, a charming rogue who is a scientist, but could get down in a barroom brawl, is a treasure hunter like Indiana Jones and is as resourceful as James Bond. So the film has a tone similar to a Raiders of the Lost Ark or a James Bond film. It’s a bit Die Hard, and has the buddy action vibe of a Lethal Weapon movie; it even throws in a bit of Lawrence of Arabia.

The direction by Breck Eisner (the son of former Disney head honcho Michael Eisner) is by the book, and almost, but not quite pedestrian. The film comes across as a true collaboration. The script hits the right notes. The cinematographer does a good job capturing pretty pictures. The editor does a professional job, not any more or less than any of the rest of the crew. The cast is also pleasant. Matthew McConaughey is a movie star with handsome, good looks and a good character actor – not always common in leading men. Steve Zahn is funny, but the role of Al Giordino is not like his better-known quirky, comedic parts. Penelope Cruz is just not a good actress (at least speaking English), and when she isn’t being a zombie in this film, she actually manages some good scenes. There is a nice supporting cast with Delroy Lindo and William H. Macy adding a bit of seriousness and gravity to the flick. The best supporting parts belong to Paulin F. Fodouop and Lennie James as feuding military leaders, Modibo and General Kazim, respectively.

Sahara is not a great film or even a very good film; it’s certainly not film art. However, it’s the kind of solid entertainment flick that doesn’t deliver too much to overload the senses or deliver too little, which pisses off the viewer.

Posted by Leroy Douresseaux at 9:38 AM