"Halloween H20" a Standout in the Franchise 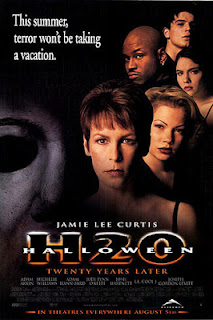 The subject of this movie review is Halloween H20: 20 Years Later, a 1998 slasher film from director Steve Miner. Although he is only credited as one of the executive producers, Kevin Williamson, the screenwriter of the hit horror movie, Scream, contributed as a writer on Halloween H20.

Halloween H20 is also the seventh film in the Halloween horror film franchise that began in 1978 with the highly influential John Carpenter film, Halloween. Halloween H20 takes place 20 years after the events depicted in Halloween and its sequel, Halloween II (1981). Once again, the cursed brother-sister duo of Michael Myers and Laurie Strode must struggle against one another. Halloween H20 ignores the third (which did not involve Michael Myers) through the sixth installments of the franchise.

Halloween H20: 20 Years Later opens in 1998. As Halloween approaches, Michael Myers (Chris Durand) reappears. Meanwhile, Laurie Strode (Jamie Lee Curtis) is living in Summer Glen, Northern California under the assumed name, “Keri Tate.” She is the headmistress at the posh, secluded, private boarding school, Hillcrest Academy High School. Laurie also has a boyfriend, Will Brennan (Adam Arkin), but her life isn’t quite perfect. She is a functioning alcoholic, forever fearful that Michael will come coming looking for her. Her son, 17-year-old John Tate (Josh Hartnett), is tired of dealing with his mother’s paranoia. On Halloween night, however, John will discover that his mother has to face her fears one more time.

I have to keep it real. I really like Halloween H20: 20 Years Later. I have seen it in its entirety three times, and I still watch bit and pieces of it whenever it is shown on television. It never fails to thrill me, and it is easily the best Halloween film since the first two. I give a lot of the credit for this movie’s quality to director Steve Miner and the various screenwriters.

Miner is a veteran film director, having helmed several horror films, including House (1986), Lake Placid (1999), and two installments of the Friday the 13th franchise. Miner uses some of the techniques that Carpenter used in the original film. He builds intensity with musical cues, eschews gore in scenes of violent death, uses darkness and shadow to create an atmosphere that suggests fear and mystery, and turns every setting into a place of danger, regardless of the time of day. Halloween H20 is quiet and ominous rather than frantic and clumsy, which some of the Halloween films are.

I don’t know which writers contributed what to the screenplay, but clearly (to me at least) the respect for the original films comes first for Kevin Williamson. Halloween H20 is smooth and also stripped down to its raw essence: Michael Myers’ relentless drive to kill his sister and Laurie’s naked fear of Michael finding her and killing both her and her son.

Without John Carpenter and actress Jamie Lee Curtis, the Myers character had not been able to carry this franchise. With Myers alone, each Halloween was simply another bad slasher flick – a movie that was little more than product turned out, like a cheap fast food hamburger, to separate a sucker from his money. With Miner doing his best work, Curtis returns and makes Halloween H20: 20 Years Later one of the best horror movies of the 1990s. It is scary, thrilling, a little funny, and sometimes a nail-biter. The people that control this franchise should have stopped here.