Review: Vincent Price Does Killer Shakespeare in "THEATRE OF BLOOD" 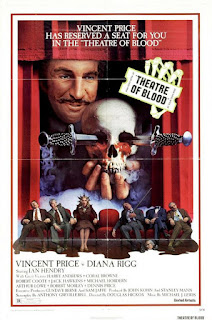 THRILLER/HORROR with elements of comedy

Theatre of Blood is a 1973 British horror-thriller and dark comedy from director Douglas Hickox.  The film stars Vincent Price as a scorned Shakespearean actor who takes revenge on his critics using the plays of William Shakespeare as reference for his diabolical methods of murder.

Theatre of Blood opens with a murder.  “Theatre Critics Guild” member, George Maxwell (Michael Hordern), is repeatedly stabbed by a mob of homeless people turned murderers.  Maxwell and his fellow guild members recently humiliated Shakespearean actor, Edward Kendal Sheridan Lionheart (Vincent Price).  He was thought to have committed suicide by jumping from the balcony of the guild's headquarters.  Instead, Lionheart was rescued by the very vagrants and homeless people that hehas  recruited to his cause – revenge against the critics who failed to acclaim his genius.

Now, Lionheart has targeted the eight remaining members of the Theatre Critics Guild, designing their deaths using murder scenes from the plays of William Shakespeare.  The police are trying to discover the identity of the killers, and even after they do, they still can't seem to stop him.  Only one of his targets, critic Peregrine Devlin (Ian Hendry), seems smart enough to foil Lionheart.  However, Devlin has no idea just how obsessed and focused Lionheart is.

Vincent Price (1911–1993) was an American actor and a legendary movie star, in addition to being an author and art historian.  Price was and still is best known for his performances in horror films, although his career spanned other genres.  Price appeared in more than 100 films, but he also performed on television, the stage, and on radio.

I am currently reading the wonderful comic book miniseries, Elvira Meets Vincent Price, which is written by David Avallone, drawn by Juan Samu, and published by Dynamite Entertainment.  The series will end shortly, and because I have enjoyed reading it so much, I decided to watch and review a Vincent Price movie.  The first Vincent Price movie that I can remember seeing was Theatre of Blood (known as Theater of Blood in the United States).  As I haven't seen it since that first time, I decided to watch it again.

At first, I found myself enjoying Edward Lionheart's revenge and the games of death he plays with his enemies, the critics who would not give him the honor he believes he is due.  Then, I noticed that Lionheart's murderous crusade drags in an ever growing number of innocents and collateral damage.  At that point, I was forced to realize that the beguiling Lionheart is a deranged maniac and probably has been one for a long time.

After I accepted that Lionheart was neither hero nor anti-hero, but was instead a lunatic, I began to enjoy Price's not-quite-over the top performance, with its alternating layers of madness, subtlety, elegance, and maniacal glee.  By the time, I finished Theatre of Blood, I realized a few things.  One is that I need a regular dose of Vincent Price cinema in my life.  Another is that I will absolutely recommend this movie to you, dear readers.