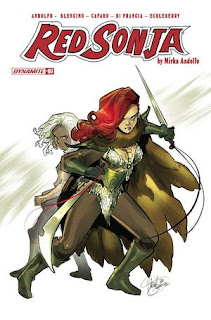 Red Sonja Volume 6 #7 opens in the village of the “Feud of the Seven Gallows” with the story of its ruler, Baroness Drang.  Now, we learn why she has been holding Red Sonja as her prisoner for so many days.  Meanwhile, Sitha and Kebra, the 16-year-old thief who has befriended her, loot the Baroness' treasure chamber.

But will Kebra keep her word to help Sitha rescue the She-Devil with a Sword?  Can a weakened Red Sonja survive the Baroness?  Will “Xamul,” the demigoddess of fire, wind, and fury that resides in her, leave Sitha in peace.

THE LOWDOWN:   In July 2021, Dynamite Entertainment's marketing department began providing me with PDF review copies of some of their titles.  One of them is Red Sonja Volume 6 #7 which is the latest of several Dynamite Entertainment Red Sonja comic books that I have read.  This is also only the ninth issue of a Mirka Andolfo comic book that I have read.

I admire that Andolfo and Luca Blengino have managed to extend this story past the point that I thought they reasonable could.  What seemed like a mere story of Red Sonja escorting a waif has become a complex story of figures who act essentially as mother and daughter.


I READS YOU RECOMMENDS:  Fans of Red Sonja and of Mirka Andolfo will want to try Red Sonja Volume 6.