Review: Hurt and Turner Put All the Heat in "BODY HEAT" 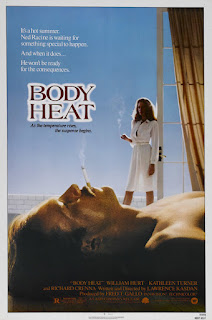 Body Heat is a 1981 romance and crime drama written and directed by Lawrence Kasdan.  The film is set in Florida during a searing heat wave and focuses on a small-town lawyer and a sultry woman who conspire to murder her rich husband.

Body Heat introduces Ned Racine (William Hurt), an inept lawyer who operates out of Okeelanta County, in southern Florida, which is in the middle of a searing heatwave.  One night, he chances upon a very attractive woman, who is all alone.  Although she initially rebuffs his amorous attempts, she eventually gives in to Ned's advances and identifies herself as Matty Walker (Kathleen Turner).  She lives in a posh mansion with her mysteriously wealthy husband, Edmund Walker (Richard Crenna).  Edmund is usually away on business during the week, so that is when Matty is alone.

Ned and Matty begin a torrid affair.  When they can be together, they have lots of sex in the sweltering heat of the night.  When Edmund is home on the weekends, Matty longs to be with Ned, as he longs to be with her.  If Matty were to divorce her husband, an onerous marital prenuptial agreement would leave her with very little, but she would get half his estate if he died...  Matty wishes Edmund was dead, and Ned presents her with a way to get rid of him.  Ned believes that he has figured out how to get away with murder, but has he figured out Matty Walker?

William Hurt (1950-2022) recently died after a reported battle with cancer, and I was taken aback.  William Hurt was one of the biggest names in Hollywood in the 1980s when I was first coming of age an a film fan.  I have decided to go back and watch some of his films that I'd previously seen and also to watch some for the first time.  One of those first time films is Body Heat, which was only the third film in which he'd starred.  It is apparently the film that made him a “bankable” Hollywood movie star.

Body Heat is also the film debut of Kathleen Turner.  Her physicality and obvious and frank sexuality made her a star of the 1980s.  Her adventurousness in choosing movie roles created an eclectic filmography, but Turner's star waned in the 1990s.  In Body Heat, however, she is ready to unleash her unique skill set on the world.  Matty Walker is Turner's signature work, and bits and pieces of the character and her performance of the character continued to show up in her work in the decades that followed the original release of Body Heat.

Here, in Body Heat, Hurt and Turner are stars ascendant.  At first, I wondered if they would have screen chemistry, and from my point of view, they are magnificent together.  The fact that they are willing to be naked together so often in this film speaks to their professionalism and also the depth of their skill as actors.  Both had performed on stage before they entered the world of Hollywood films, so they had acting experience.  That experience was needed in filming what has been described as many explicit sex scenes that were not included in the finished film.

Still, what is left on screen is hot and nasty.  Turner and Hurt are so hot together that they damn near burned this film down, which it needs.  The truth is that Body Heat is rather tepid.  The film is described as a “neo-noir,” a modern version of the classic Hollywood film genre, “Film-Noir.”  Outside of the depictions of sex and nudity, Body Heat's story and the execution of its narrative, to me, seem rather tame compared to a film like, for instance, 1950's Gun Crazy, another romantic crime drama about a killer couple.  Writer-director Lawrence Kasdan, one of the best writer-directors and screen writers of the last five decades, apparently found inspiration for Body Heat in the 1944 Film-Noir classic, Double Indemnity.  Well, it's time for me to see that one.

Beside Ned Racine and Matty Walker, I like the other characters in this film.  Richard Crenna is really good in a small role as Edmund Walker; he deserved more screen time.  Ted Danson's Peter Lowenstein is good, but seems extraneous in this film, and J.A. Preston's Oscar Grace, a police detective, has his best moments in Body Heat's last act.  Also, if you ever wondered what Hollywood executives saw in Mickey Rourke that would make him a star, his small but potent turn as Teddy Lewis, an explosives expert and former client of Ned's, reveals the first glimmer of his movie star potential.