"The Batman" Soundtrack is Out Now 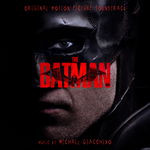