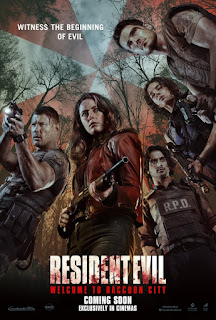 Resident Evil: Welcome to Raccoon City opens sometime in the 1980s in the small town of Raccoon City.  The Raccoon City Orphanage is the current home of orphaned siblings, Claire Redfield (Lily Gail Reid), and her brother, Chris (Daxton Grey Gujral).  The children are subject to being experimented on by Dr. William Birkin (Neal McDonough), an employee of the Umbrella Corporation, the world's largest pharmaceutical company.  Eventually, Claire manages to run away.

On the rainy night of September 30, 1998, an adult Claire (Kaya Scodelario) returns to Raccoon City.  She hopes to convince her estranged brother, Chris (Robbie Amell), who is now an officer of the Raccoon City Police Department (RPD), that Umbrella is experimenting on the people of the city.  However, Chris is not happy to see his sister, nor does he believe what she tells him about Umbrella's activities.

In fact, Umbrella Corp. has pulled out of Raccoon City, turning it into a ghost town.  The only people still in town are a skeleton crew of the corporation's last employees and those who are too poor to leave.  Before Claire can convince anyone of anything, Raccoon City's remaining citizens start getting sick and eventually, they begin turning into hungry zombies.  Soon, Claire and Chris are each leading a small group of police officers on a quest to escape the city with neither knowing that they are rapidly running out of time.

Resident Evil: Welcome to Raccoon City was not a success at the box office, which is a shame.  As the first entry in a new series of films, it is superior to Resident Evil, the 2002 film that kicked off the franchise.  I will be honest.  The characters are shallow, but character development and motivation are not the most important things in Welcome to Raccoon City.  The scares are.

To that end, it is very successful.  Writer-director Johannes Roberts turns in a film that makes superb use of nighttime settings, shadows, darkness, and a rainy night.  With film editor, Dev Singh, Roberts strangles his audience with fearsome sequences of zombies and monsters jumping out of every darkness.  There is a scene in which Chris Redfield has to ward off zombies with very little light.  Every time, he fires his weapon, there is a flash that briefly illuminates an attacking zombie.  In fact, Welcome to Raccoon City's zombies may be twenty-first century's scariest.  I felt that with every bump and thump in the night my blood was freezing.

I hope that Johannes Roberts gets a shot at making a sequel to Welcome to Raccoon City.  Online and especially on social media, I have come across complaints about this film, but these complainers must be jaded.  In the blended genre of survival horror and zombie films, Resident Evil: Welcome to Raccoon City is quite an achievement.