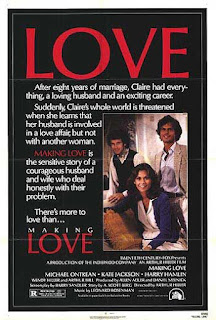 Making Love is a 1982 romantic drama and LGBTQ film from director Arthur Hiller.  Making Love focuses on a successful Los Angeles couple making big plans for their future when the husband finds himself unable to keep repressing his attraction for other men.

Making Love is set in the early 1980s and introduces three 30-something characters.  The first is Dr. Zack Elliot (Michael Ontkean), a successful, Los Angeles-based oncologist.  He is married to Claire Elliot (Kate Jackson), an equally successful television network executive.  Claire and Zack have been married for eight years and are generally happy.  They are talking about having a baby, so they buy a bigger house.

Unknown to Claire, however, Zack has been struggling with feelings of attraction for other men.  He begins loosening these long-repressed feelings by cruising places where gay men congregate to pick up other men for sex.  Enter the film's third main character, Bart McGuire (Harry Hamlin), a successful novelist and gay man.  Bart goes in for a medical check-up, and Zack is temporarily seeing the patients of Bart's regular doctor.

Bart frequents gay bars and clubs and has multiple sexual partners, preferring one night stands to committed relationships.  Zack and Bart are mutually attracted to each other, but there are complications.  As gay men, each wants something different in intimate relationships.  Meanwhile, Claire is having professional struggles, and she starts to suspect that Zack is cheating on her.  However, she would never suspect that he is cheating on her with another man.

This is the fortieth anniversary of the theatrical release of the landmark gay film drama, Making Love, specifically February 12, 1982.  While Making Love was not the first gay-themed film released by a major Hollywood studio, it was the first mainstream Hollywood film drama to address particular subjects related to homosexuality, such as the effect of a spouse coming out while being in a heterosexual marriage and also the toll of being closeted on a gay man.

Making Love is not a great film; at best, it is average or maybe a little above average.  Apparently, it has been accused of dodging its core subject, which is that of a gay man not only coming out while being married to a woman, but also engaging in an affair with another man.  Making Love does not actually duck or dodge any sensitive homosexual issues.

The problem is that the film addresses too many issues.  Zack Elliot is having a midlife crisis.  Repressed, Zack is horny and cruises for gay sex, but usually backs out before the sex can begin.  Claire is having a career crisis.  She wants her television executive bosses to utilize the talents for which she was hired, but they ignore her thoughtful programming pitches.  She wants to take a year off so that she can have a baby.  Her desire to have a better relationship with her estranged father also crops up.  Bart treats each man that he wants to screw like he is the perfect guy for him.  Yet as soon as the sex is over, Bart hops out of bed and heads home.  He is always on the prowl, but seems to yearn for a little more.

This are enough subplots and melodramatic twists for a television series, but it is a bit much for a film.  What also hampers the film is that with so much to talk about, a lot of the dialogue is stiff and sounds contrived when the actors speak it.  The performances are well meaning, but the screenplay for Making Love does address what is at the heart of this film.

Making Love may be a gay drama, but the way I see it, the story is really about the dysfunction in Zack and Claire's relationship and in Zack and Bart's relationship.  Making Love is really not about “making love,” but about people being honest about what they want from a partner and what they really want for themselves.  Making Love only deals with that in a shallow way, but I do give the film, the filmmakers, and the cast the credit for making this kind of film.  Making Love depicts homosexuality and being a man who wants to have sex with lots of other men seem like perfectly normal aspects of modern American life.