Review: "THE RETURN OF THE LIVING DEAD" is Still Alive and Kicking 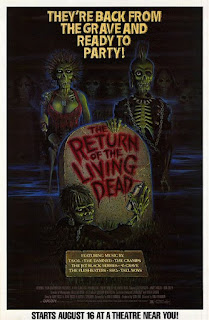 The Return of the Living Dead opens early on the evening of July 3, 1984 in Louisville, Kentucky.  At the Uneeda Medical Supply warehouse, owner Burt Wilson (Clu Gulager) is leaving work for the Fourth of July holiday weekend, leaving his employee, Frank (James Karen), behind to close-up shop and to also train new employee, Freddy (Thom Mathews).  Frank tries to impress Freddy by showing him some old container drums that the U.S. military mistakenly shipped to Uneeda and are now stored in the warehouse basement.

What Frank does not know is that the drums also contain a toxic gas called “2-4-5 Trioxin.”  Frank accidentally unleashes the toxic gas from one of the tanks, which knocks him and Freddy unconscious.  When the two bumbling employees awaken, they discover that the gas has reanimated a medical cadaver stored in the warehouse's cold locker.  Frank and Freddy call Burt back to the warehouse, but everything they do to solve their “zombie” problem makes matters worse.  That includes asking Ernie Kaltenbrunner (Don Calfa), owner of Resurrection Funeral Home, for help.

The film owes much of his identity, spirit, and success to writer-director, the late Dan O'Bannon (1946-2009).  He was one of the most imaginative and genre-busting screenwriters in the history of American science fiction, fantasy, and horror films, writing for such films as Alien (1979) and Total Recall (1990).  O'Bannon produces a film that acts as if it owes nothing to the zombie fiction and horror storytelling that came before it, while gleefully cutting and pasting bits and pieces of American pop culture all over itself.

The casting of this film is an accidental work of brilliance.  All the actors are pitch perfect:  tongue-in-cheek, over-the-top, comically straight, and slyly satirical.  James Karen and Thom Mathews are perfect as Frank and Freddy, respectively, the bumbling employees that release the gas which turns the dead into zombies.  Actor Clu Gulager, who always played the “White Man” boss/leader type, plays Burt Wilson with a artfully satirical edge that is easy to miss.  Linnea Quigley personifies a kind of punk sex goddess and later a deadly sex creature.  As “Spider,” actor Miguel A. Núñez Jr. creates what is one of my favorite male African-American horror movie characters.

The Return of the Living Dead is now one of my favorite zombie films, and perhaps, it is a coincidence that one of my other favorites, George A. Romero's underrated post-apocalyptic jewel, Day of the Dead, was releases the same year, 1985.  [Or maybe something was trying to warn me about the future.]  I highly recommend The Return of the Living Dead (which is available in a “special edition” DVD) and its soundtrack.  This is the most fun I have ever had watching a zombie film … or zombie anything, for that matter.