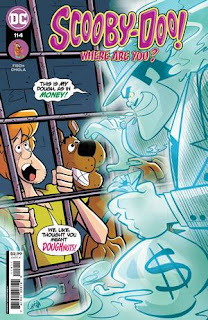 Scooby-Doo, Where Are You? #114 opens with “Jailhouse Shock,” which is written by Sholly Fisch and drawn by Valerio Chiola.  The story finds Mystery Inc.:  Scooby-Doo, Shaggy, Fred, Daphne, and Velma  at a local police station, after closing their most recent case involving bank fraud and someone masquerading as a Yeti.

Before they can leave, they learn from Sarge, the head of the station, that the building is being haunted.  The haunt is none other than the ghost of the notorious early twentieth century bank robber, Muggsy Derringer, who claims to want revenge.  The real Muggsy, however, was hunted down a century ago in Chicago, so why would his ghost be haunting this police station?  It is up to the gang to find out?

The second story, “Dead & Let Spy” is, as usual, a reprint story and is written by Alex Simmons and drawn by Robert Pope and Scott McRae.  [This story was originally published in Scooby-Doo #106 (cover date: May 2006).]  Mystery Inc. is meeting the spymaster “G,” who wants the gang to help his nephew, J.Z. Bang, a teen secret agent.

J.Z. is used to dealing with spies and secret agents, but his latest adversary, a freelance agent called “Cadaver,” uses spooky tricks, such as employing monsters and ghouls.  The teen secret agent is trying to gather the ten pieces of a new invention created by the eccentric Dr. Ooh.  He needs help fighting off a menagerie of creeps that look as if they are a rogues gallery from a horror film festival.  Are the monster-hunting talents of Mystery Inc. just want J.Z. Bang needs?

The funniest thing about “Jailhouse Shock” is that Mystery Inc. knows from the beginning that the ghost of Muggsy Derringer is a fake.  Well, at least Shaggy and Scooby-Doo are willing to sell the idea that they are facing a real ghost.  While Sholly Fisch's story is funny, I still haven't bought into Valerio Chiola as an appropriate artist for a Scooby-Doo comic book.  He draws the Mystery Inc. characters well enough, but all the other character are awkwardly drawn.

“Dead & Let Spy,” the reprint tale, is a better story and it is also drawn by one of the better Scooby-Doo comic book artists, Robert Pope, inked here by Scott McRae.  Pope's graphical storytelling is fast paced, from beginning to end, and he offers an impressive menagerie of monsters.  The monsters J.Z. Bang faces include the classic Scooby-Doo creep, the Yeti, which first appeared in “Scooby-Doo, Where Are You!” (1969-70) Season One, Episode 17 as the “Snow Ghost.”  I think writer Alex Simmons has come up with a scenario that would make a nice Scooby-Doo graphic novel and perhaps, be excellent source material for an animated Scooby-Doo film.

Posted by Leroy Douresseaux at 5:36 PM