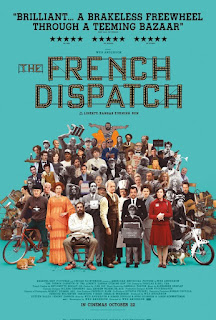 COMEDY/DRAMA/ANTHOLOGY with elements of fantasy

The French Dispatch (full title: The French Dispatch of the Liberty, Kansas Evening Sun) is a 2021 comedy-drama and anthology film from writer-director Wes Anderson.  The film focuses on the French foreign bureau of a Kansas newspaper and the features magazine it produces.

The French Dispatch introduces Arthur Howitzer Jr. (Bill Murray).  When he was a college freshman, he convinces his father, the owner of the newspaper, the “Liberty, Kansas Evening Sun,” to fund his transatlantic trip.  Junior would in turn produce a series of travelogue columns, which would be published for local readers in the Evening Sun's magazine supplement “Sunday Picnic.”  Arthur, Jr. sets up shop in the (fictional) French town of Ennui-sur-Blasé.  Over the next decade, young Arthur assembles a team of the best expatriate journalists of the time.  In 1925, he transforms the Sunday Picnic into the weekly magazine, “The French Dispatch” (something like The New Yorker).

In 1975, fifty years after he left Kansas, Arthur Howitzer, Jr. dies suddenly of a heart attack.  Although it has half a million subscribers in 50 countries, as per his will, The French Dispatch will immediately cease publication following the release of a farewell issue that will feature Arthur's obituary and four articles by magazine's best writers:

In “The Cycling Reporter,” Herbsaint Sazerac (Owen Wilson) gives a sight-seeing tour.  It is “a day in Ennui over the course of 250 years” and demonstrates how much and yet how little has changed in Ennui over time.

In “The Concrete Masterpiece,” J.K.L. Berensen (Tilda Swinton) delivers a lecture at an art gallery.  She details the career of Moses Rosenthaler (Benicio del Toro), a mentally disturbed artist serving a sentence in the Ennui Prison-Asylum for murder and the two most important people in his lives.  The first is Simone (Lea Seydoux), a prison officer who becomes Moses' lover and his muse.  Moses paints a portrait of Simone, and that second important person, Julien Cadazio, an art dealer also serving a sentence for tax evasion, is immediately taken by the painting.  After buying the painting, Cadazio uses it to turn Moses into an international sensation.  However, Moses struggles with inspiration, and his relationship with Simone becomes complicated.

In “Revisions to a Manifesto,” Lucinda Krementz (Frances McDormand) reports on a student protest breaking out in the streets of Ennui, one that soon boils over into the “Chessboard Revolution.”  Krementz fails to maintain “journalistic neutrality” when she falls in love with Zeffirelli (Timothée Chalamet), a college boy who is the self-styled leader of the revolt.  She secretly helps him write his manifesto, but Juliette (Lyna Khoudri), a fellow revolutionary who has some feelings for Zeffirelli, is unimpressed with his manifesto – thus, creating a love triangle.

In “The Private Dining Room of the Police Commissioner,” Roebuck Wright (Jeffrey Wright) is the guest of a television talk show host (Liev Schreiber).  Wright recounts the story of his attending a private dinner with The Commissaire (Mathieu Amalric) of the Ennui police force.  The meal is prepared by the legendary police officer and chef, Lt. Nescaffier (Stephen Park).  Nescaffier is the creator of a kind of “haute cuisine” specifically designed to be eaten by police officers while they are working.  The dinner is disrupted when the Commissaire's inquisitive and bright son, Gigi (Winston Ait Hellal), is kidnapped and held for ransom by a large gang of criminals, led by a failed musician known as “The Chauffeur” (Edward Norton).

They mourn his death.  Now, the staff of The French Dispatch must put together a final issue with these four stories that Arthur Howitzer Jr. touched in some way?

The French Dispatch has been described as a film that is “a love letter to journalists set in an outpost of an American newspaper in a fictional twentieth century French city.”  The film presents four of the magazine's stories of the city.  Director Wes Anderson has apparently stated that this film is inspired by his love of the venerable weekly magazine, The New Yorker, and that some of the film's characters and events are based on real-life equivalents from that magazine.  During The French Dispatch's closing credits, there is a dedication to several writers and editors, many of whom wrote for The New Yorker.

To that end, The French Dispatch is a movie that celebrates magazine writers, illustrators, and editors and the stories they tell.  This film is a love letter to stories of local color and of locales written for magazines.  The film demands patience and attention on the part of the audience.  The French Dispatch is a hybrid.  It is an anthology of four main stories and of a few small chapters, although everything connects in the end.  The audience has to follow each of the main stories, paying attention from beginning to the end.  That is where the pay off comes.

In fact, each of the main stories seems like one thing in the beginning, but fully develops over the course of the narrative in something different.  At the end of each, I realized that the story was about wonderful characters living lives both ordinary and extraordinary.  In the extraordinary, Anderson gives us a reason to love what is so ordinary and human about them.

This is brilliant character writing on Anderson's part.  His gift is to make not only the lead and supporting characters fascinating, but he also makes even the characters who say little and the extras seem worth knowing – even when the narrative passes them by.  To that end, I think Roebuck Wright is the character that ties all the characters and stories together.  He is the narrator/writer of “The Private Dining Room of the Police Commissioner,” the final story.  Both his first meeting and final conversation with Bill Murray's Arthur coalesces the film's theme of expatriate writers, and he begins Arthur's obituary, which also brings together the film's shifts in time.  It would have been nice to see Wright receive a best supporting actor Oscar nomination for his work here, but The French Dispatch did not receive any Oscar nominations.

Posted by Leroy Douresseaux at 2:31 PM