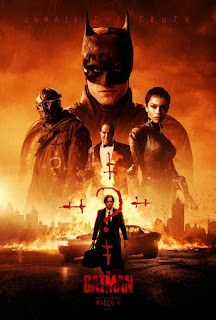 The Batman is a 2022 superhero action-drama from director Matt Reeves.  It is the eighth film in the modern Batman film franchise that began with director Tim Burton's 1989 film, Batman, and it is a reboot of the Batman film franchise.  In The Batman, a sadistic serial killer begins murdering key political figures, forcing Batman to investigate his city's hidden corruption, which may involve both his father and mother's side of the family.

The Batman (Robert Pattinson), a vigilante who has operated in Gotham for two years, works alongside Lieutenant James Gordon (Jeffrey Wright) of the Gotham City Police Department, much to the chagrin of many rank and file officers and higher-ups in the department.  They discover that with each of his murders, The Riddler leaves a message for Batman.

Batman is really reclusive billionaire, Bruce Wayne (Robert Pattinson), who obsessively protects Gotham.  So focused on his mission is Bruce that he pushes away his loyal butler and mentor, Alfred Pennyworth (Andy Serkis).  However, Batman ends up partnering with Selina Kyle ( Zoë Kravitz), a waitress who is something of a cat burglar – a “Catwoman” – who is trying to find her missing roommate and girlfriend Annika (Hana Hrzic).

The Batman will be forced to reckon with Gotham City's hidden corruption and also face tough questions about his late parents, Thomas and Martha Wayne's (Luke Roberts and Stella Stocker) involvement in that corruption  Especially, troubling is Thomas Wayne's connection to a notorious Gotham crime lord, Carmine Falcone (John Turturro).

The Batman is a film that borrows liberally from the recent film and comic book past of Batman.  I recognize story elements borrowed from Batman comic book stories like “Batman: Year One” and “Zero Year.”  There are allusions to Tim Burton's 1989 Batman film; even composer Michael Giacchino's score seems to reference composer Danny Elfman's score for Burton's film.

However, director Matt Reeves, in making The Batman, seems obsessed with or bewitched by director Christopher Nolan's hugely popular Batman films:  Batman Begins (2005), The Dark Knight (2008), and The Dark Knight Rises (2012), referred to as “The Dark Knight trilogy.”  Nolan's film were “dark” and edgy in terms of subject matter, plots, and characters, but Nolan filled the films with invigorating and tense action set pieces.

The Batman is just dark.  It is as if Reeves took Nolan's aesthetic and through a coal black filter over it.  The Gotham City of this film seems like a real-life city, and it is dark as all Hell at night and damp – really damp.  Reeves and his co-screenwriter, Peter Craig, fashion a story that is overwhelmed with political corruption and depraved criminals that are dark in personality and even darker in motivation.  Bruce Wayne is morose, as if both actor Robert Pattinson and Matt Reeves are determined to make him a caricature of the caricature that has become iconic rock musician, the late Kurt Cobain.  It is an utter waste of Pattinson's potential as both an actor and a movie star.

On the other hand, Pattinson's Batman has more layers.  Pattinson makes him formidable and dangerous, but also introspective and capable of mercy.  This Batman is also a fierce fighter, but is physically vulnerable; Bruce's body is marked with the scars of his Batman activities.  Batman is often knocked down by his opponents in hand to hand combat and seriously injured by gunfire.

Too bad that The Batman does not have better villains.  They aren't really worth talking about, but I do want to point out the really terrible version of The Riddler that is in this film.  He is a whiny, boring incel, and as The Riddler, actor Paul Dano is more doofus than diabolical.

The Batman does have good supporting characters, but the script does not give them much with which to work.  Zoë Kravitz is full of fire and talent as Selina Kyle, and when she is allowed to show her acting chops, she steals entire scenes.  Most of the time, however, it feels like all the filmmakers really want her to do is pose and look bad-ass slash alluring.  James Gordon is a mostly one-note character, and even the supremely talented Jeffrey Wright cannot make the character be more than that.  I won't get into how much the brilliant Andy Serkis is wasted as Alfred Pennyworth.

The Batman is truly at its best during the fights, chases, and action scenes.  The film also gives us a monster-like Batmobile that is more muscle car than mobile, and when Batman uses it to pursue the Penguin (Colin Farrell) in his car, the film seems to explode off the screen.

What keeps The Batman from being a really good film, to say nothing of being a great film, is that it is too long.  It is half kick-ass action and half plodding melodrama, and I wish the plodding melodrama had been cut in half.  Honestly, I would only recommend The Batman to people who enjoy watching Batman movies, regardless of whether they are comic book fans or not.

Posted by Leroy Douresseaux at 4:19 PM