Comics Review: "NIGHT OF THE GHOUL #4" 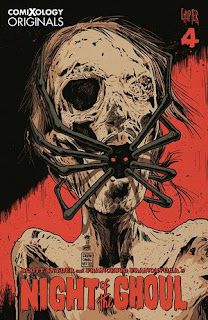 NIGHT OF THE GHOUL #4 (OF 6)
comiXology/Best Jacket Press

Johnny has summoned the rest of Eagle Company, and they have sought the help of Dale Holloway, a professor of Anthropological Studies.  An expert on the “Gul,” the wheel-chair bound Prof. Holloway has a “tincture” that will drive the Ghoul from Kurt.  But what will driving the creature out look like?

Meanwhile, in the present, Forest has returned to rescue Merritt from the clutches of Dr. Skeen, whom the old man claims has the Ghoul inside his body.  Meanwhile, Forest's wife, Gina, is desperately trying to reach him.  Their son, Orson, who accompanied his father on this hellish trip, is in trouble … underground.

THE LOWDOWN:  In Night of the Ghoul, Francavilla and Snyder have created a masterpiece of atmospheric horror.  Truthfully, it never stops being a masterpiece; I keep waiting for it it have a bad chapter or even a momentary lapse in quality, and it does not.

Episode 4 has me convinced that Night of the Ghoul is the the best work that Snyder and Francavilla have produced both as a team and as individuals.  It is certainly Francavilla's best graphical storytelling.  The color sections of issue four are scary, but the black and white or sepia segments (inside the Night of the Ghoul film) are an embarrassment of riches in terms of atmospherics.  I feel as if I am in the grip of fear in every beautiful panel in the story of Alex Powell and Johnny Polaris.

I can't wait to read more.