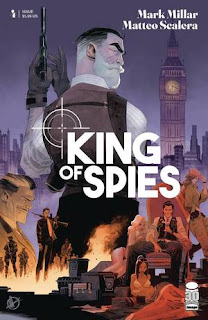 KING OF SPIES #4 (OF 4)
IMAGE COMICS/Netflix

King of Spies is a four-issue miniseries created and written by Mark Millar.  It focuses on the world's greatest secret agent who has six months to live and won't die quietly in a hospital bed.  Published by Image Comics, King of Spies is drawn by Matteo Scalera; colored by Giovanna Niro; and lettered by Clem Robins.

British secret agent, Sir Roland King, is 65-years-old and has just been diagnosed with Glioblastoma, the most aggressive from of brain cancer.  Facing an unusual, mid-life turned end-of-life crisis, King decides to go to war with the very system that he propped up for 40 years.  Kings, presidents, crooks, and the greedy pigs who treat everything like their personal troughs: King is coming for you.

King of Spies #4 opens in the past – a sort of origin of Roland's relationship with his ex-wife, Ornella, and especially with his son, Atticus.  Present day, Roland is riddled with bullets and dying, but in his time of greatest need, an old love has returned to nurse him back to life.

Yes, King has escaped his now adult son, Atticus, who is leading the mission to kill him.  Foiled again, King's old bosses decide to play dirty.  It is Roland's self-assigned final mission:  murdering all the men and women in high office that he knows are to blame for the absolute mess the world has become.  But to do this will cost Roland everything, even if it gives everything to the people he hurt long ago.

THE LOWDOWN:  Mark Millar's fifth original comic book property for Netflix, King of Spies, comes to an explosive and shocking conclusion.  It is impressive that Millar delivered one killer spy comic book series, the Kingsman series, beginning with 2012's The Secret Service.  However, it is more impressive that Millar actually delivers a second one, this amazing King of Spies.

Artist Matteo Scalera's supremely skillful graphical storytelling and brilliantly designed compositions and pages made King of Spies fly as high as any action movie.  King of Spies #4 reveals Scalera's deft and subtle touch with genuine emotion and love.  The rekindling of Roland's former love interest is poignant and painful, as Scalera depicts the wrenching reality of what the relationship was and the heartbreaking possibilities of what that relationship could have been.  Giovanna Niro's colors and Clem Robins' letters complete the beautiful graphics package that is this fourth and final issue, as they did for the previous issues.

Mark Millar could have rested on his laurels.  After all, by the time Millar sold Millarworld to Netflix, he already had an extensive backlist of creator-owned publications.  Those comic books yielded an impressive library of intellectual property.  Many comic book creators have cashed in on a big Hollywood sale of one comic book property and rested on that laurel.  Now an executive at one of the planet's most influential and powerful media companies, Mark could have relaxed.

Yet, Millar is actually still writing comic books, and not just any kind of comic books.  He is delivering (forgive me) kick-ass titles like King of Spies, which offers a clever, shocking, and pleasing ending.  Best of all, King of Spies #4 assures that the series will be an evergreen of the spy genre – good now and still good by the time EON Productions names its next James Bond … and the next...


The text is copyright © 2022 Leroy Douresseaux. All Rights Reserved. Contact this blog or site for reprint and syndication rights and fees.
-----------------
Amazon wants me to inform you that the link below is a PAID AD, but I technically only get paid (eventually) if you click on the ad below AND buy something(s).
Posted by Leroy Douresseaux at 5:09 AM