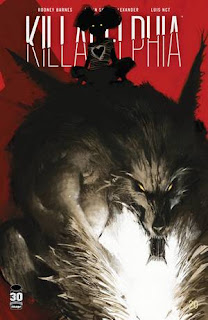 “The End of All” Part II: “The Decision”

Killadelphia focuses on James “Jim” Sangster, Jr. and his father, revered Philadelphia homicide detective, James Sangster, Sr., thought to be dead.  He is actually a vampire.  Now father and son lead a ragtag team comprised of a medical examiner, a dead president, and a rebellious, but special young vampire (Tevin Thompkins a.k.a. “See Saw”) in a bid to save Philly from an ambitious and murderous former First Lady, Abigail Adams.

As Killadelphia #20 (“The Decision”) opens, the rebellious and very special young vampire, Tevin Thompkins a.k.a. “See Saw,” finds himself at a crossroads … of sorts.  George Washington – yes, that one – wants to have a meeting of the minds with him.  That means the “Father of Our Nation” has a (back) story to tell.  Hope it does not put See Saw to sleep, but he better listen.  This undead president has some illuminating allies.

Abigail Adams and her lot plot against her husband, former President John Adams, and his forces, which are now aligned with the Sangsters and their allies.  Where will the former First Lady go to find an equalizer?

And are Zubiya and her werewolf pack and Tituba, the witch of Stregheria, really allies?  And if so, how far are they willing to go?

THE LOWDOWN:  Killadelphia's fourth story arc, “The End of All,” has just begun, and it is outta sight! already.  It is being described as a turning point in the series, and Killadelphia #20 is indeed filled with a lot of big things and big reveals.

While Rodney Barnes was writing beautiful comic books like Killadelphia and Nita Hawes' Nightmare Blog, he was also co-writing (and acting in) an entire damn event television series for HBO (“Winning Time: The Rise of the Lakers Dynasty”).  One could never tell, though.  Killadelphia feels like the work of someone exercising his insane imagine over the hot stove of this narrative, with a simmering pot on each burner – and focusing on nothing else.

As he has for a couple of years now, artist and co-creator, Jason Shawn Alexander, turns Barnes' brilliant script into the most intense and invigorating dark horror comic book art and graphical storytelling that I have experienced in a long time.  The crazy thing about Alexander's amazing work is that, at least to me, every issue looks different, and, even more so, seems different.  It is as if Killadelphia takes place in a thousand dreaming cities, and Alexander will show us every version of this dream – even if his drawing hand falls off.  He even takes time to give us a George Washington that looks like “New Romantics”/pop era David Bowie.  How about that for an immortal makeover?

So take a trip to Killadelphia.  The good stuff … and other things are waiting for you.

Posted by Leroy Douresseaux at 3:34 AM