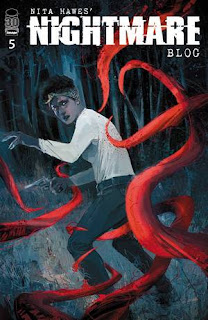 Nita Hawes' Nightmare Blog is a comic book series created by Rodney Barnes and Jason Shawn Alexander.  Nita Hawes' Nightmare Blog is written by Barnes.  It has been drawn by the artists Jason Shawn Alexander, well-BEE, and Patrick Reynolds, with Szymon Kudranski being the current artist.  Colorist Luis Nct and letterer by Marshall Dillon complete the creative team.  The series focuses on a woman who is on a quest to root out the evil in her city.

In Baltimore, Maryland, which some call “Bodymore, Murderland,” there is a woman named Dawnita “Nita” Hawes.  She is the owner of “Nita Hawes' Nightmare Blog” where citizens can contact Nita when they have a problem of a supernatural or paranormal nature.  Nita has just begun her quest to root the evil out of her city – with the help of her dead brother, Jason.

As Nita Hawes' Nightmare Blog #5 (“Soul Searching”) opens, an elderly, wheel-chair bound Steve Carpenter attends the graveside funeral of his son, daughter-in-law, and two grandsons.  Once upon a time, Carpenter and his late business partner, Harry Boartfield, owned the recording contract of the legendary blues singer, “Howlin'” Henry Hawkins.  Old Henry gave his body over to one of the four demon kings, Corson, to pay back Carpenter and Boartfield for screwing him over.  Carpenter's kin just happened to be on the worst end of the payback.

Somewhere down below, our new favorite paranormal investigator, Nita Hawes, is philosophizing with a big boss demon.  And if that weren't bad enough, Nita will end up in a still worse place and have to deal with an ex – someone familiar to us.

THE LOWDOWN:  Nita Hawes' Nightmare Blog is a spin-off of Rodney Barnes and Jason Shawn Alexander's hit vampire comic book, Killadelphia.  Nita's connections to the series play a big part in this opening story arc, “The Fire Next Time,” which has reached it penultimate issue.

Writer Rodney Barnes approaches Nita Hawes' Nightmare Blog with the same force of imagination with which he brings to Killadelphia.  However, Nita Hawes is the eye of the storm in her own series in a way that no single character in Killadelphia is.  In that way, Nita has power in a manner that the character John Constantine had in his series, Hellblazer.  Since DC Comics ruined Hellblazer, Barnes' has created the perfect series to take its place.

Artist Szymon Kudranski current run as the series' artist is straight hellfire.  Kudranski brings Barnes' occult infusions to life with madness and magic, and he makes the “Nightmare” in the title stay nightmarish.

I READS YOU RECOMMENDS:  Fans of Killadelphia and of the original Hellblazer will want Nita Hawes' Nightmare Blog.