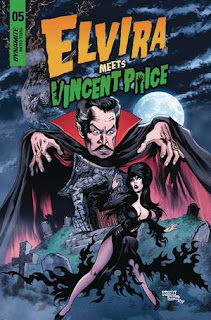 Elvira and Vincent Price team up for the first time in the comic book miniseries, Elvira Meets Vincent Price.  The series is written by David Avallone; drawn by Juan Samu; colored by Walter Pereyra; and lettered by Taylor Esposito with Elizabeth Sharland.  The series found Elvira and Price searching for a long-lost cult movie, “Rise of the Ram,” and trying to save the world from destruction at the hands of the ancient Egyptian god, Amun-Ra.

Elvira Meets Vincent Price #5 (“Final Girl Lost”) opens somewhere in Hollywood.  In the wake of saving the world from whack-ass Egyptian gods, Elvira and Vincent are enjoying a night of board games.  Then, Elvira gets an urgent call from her agent.

A friend, Darlanne Wing, a “scream queen” actress, is missing, and the leading suspect is horror movie mogul, Stanley Saliva.  Saliva, who produces “The Crawling Creep” films, in which Darlanne stars, has been stalking her for some time.  So Elvira and Vincent join forces again and travel to Saliva's creepy mansion.  To find Darlanne, the duo will to literally break the fourth wall and enter the world of a slasher movie.  Can Elvira and Vincent save Darlanne and themselves before Vincent has to depart for the spirit world?

THE LOWDOWN:  In July 2021, Dynamite Entertainment's marketing department began providing me with PDF review copies of some of their titles.  One of them is Elvira Meets Vincent Price #5, which is the fifth issue of the series that I have read and one of many Dynamite Elvira comic books that I have thoroughly enjoyed.

Well, all good things must come to an end, although whenever one David Avallone Elvira series disappears, another is just around the corner.  This time around, however, it is a little bittersweet.  Elvira Meets Vincent Price reminded me of how much I miss Vincent Price, who has been dead for a little over three decades.  From time to time, I'll see a genre film or television series, and I'll suddenly think that Vincent would be wonderful in it.

This final issue is filled with Avallone's sparkling dialogue and zany antics.  Juan Samu draws it all in a lovely mercurial graphical storytelling style that is part comic horror and part bromance.  Walter Pereyra's colors add a lovely vintage touch to the art and storytelling.  All of it is nicely wrapped up in a lettering bow by Taylor Esposito and Elizabeth Sharland.

Elvira Meets Vincent Price is a winner, and as Avallone tells us inside the story, the trade collection of this series will be here sometime in the near future.  It is a chance to relive the series or discover its golden touch.  My slight sadness is tempered by the fact that there is another series headed our way.  Dynamite, Elvira, and an Avallone-led creative team are comic book platinum.


The text is copyright © 2022 Leroy Douresseaux. All Rights Reserved. Contact this blog or site for reprint and syndication rights and fees.
-------------------------
Amazon wants me to inform you that the link below is a PAID AD, but I technically only get paid (eventually) if you click on the ad below AND buy something(s).
Posted by Leroy Douresseaux at 1:21 PM