Comics Review: "THE MAGIC ORDER 2 #6" - the Finale That Kills 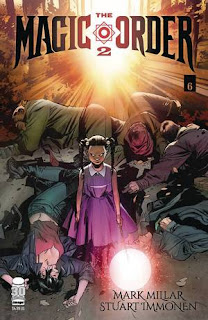 The Magic Order 2 finds The Magic Order and its new leader, Cordelia Moonstone (an “escapologist”), caught in a turf war.  Their adversaries are Victor Korne and his group of Eastern European warlocks whose ancestors the Order once banished.

The Magic Order 2 #6 opens and it seems as if Victor Korne has won.  He has used the ancient Egyptian talisman, the Stone of Thoth, to summon the creature, Othoul-Endu, from the “Outer Dark.”  With the creature's power, Korne can think anything and it will happen.

A wayward son and a child will ride to the Order's rescue.  But for the Order, nothing will be the same … even if they survive.

THE LOWDOWN:  As I wrote in my reviews of the fourth and fifth issues:  with each issue, The Magic Order 2 surpasses it predecessor.  That is quite the accomplishment, as the first miniseries, The Magic Order, was and is awesome, but the imagination of Mark Millar is like a magic wand.  Now, The Magic Order 2 #6 closes this great series.

I feel comfortable saying that The Magic Order series is the best English-language, magical fantasy comic book franchise of the moment.  Walt Disney Pictures and Marvel Studios may indeed deliver a gem in its upcoming film, Doctor Strange and the Multiverse of Madness, but Marvel Comics' Doctor Strange comic book...  Well, don't believe the hype.  Steve Ditko's Doctor Strange showed the potential in comic books about magic, and with The Magic Order 2, Millar pays off on that potential.

Artist Stuart Immonen and colorist David Curiel create a symphony of lightning and supernovas.  I could feel the energy of Immonen and Curiel's work in my eyes.  This story is alive, so alive that it feels like a curtain closing on an act rather than feeling like a finale of an arc.

Comic book readers who hate good comic books are not reading The Magic Order 2.  So I ask again.  Are you reading it, dear readers?