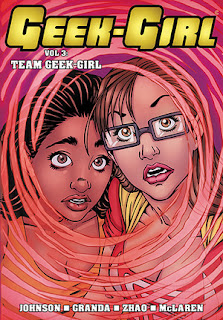 Created and written by Sam Johnson (The Almighties, Cabra Cini: Voodoo Junkie Hitwoman) and illustrated by C Granda (Charmed, Grimm Fairy Tales) - Geek-Girl is a series featuring attractive, popular Maine college co-ed Ruby Kaye – a girl used to getting whatever she wants – who lands a pair of power-inducing super-tech glasses.
Since gaining her powers, Geek-Girl (a moniker jokily given to Ruby by her BFF, Summer James, after Ruby’s initial difficulty handling her newfound super-strength led to some klutzy actions) has blossomed from a self-satisfying ‘It’-Girl to the heroine of her city of Acorn Ridge, Maine – taking down major-threat super-villain Lightning Storm and playing an integral part in stemming the crime wave that sprung up in the wake of the damage Lightning Storm did to Maine’s law enforcement.
In the process of this, Geek-Girl has caught the eye of a certain Mr. Johnny Carlyle – a morally questionable entrepreneur who is looking to put together a Super-Team.
Sam Johnson fills us in saying, “Johnny showed up previously in the Geek-Girl series as a super-tech weapons dealer who was suspected of selling his wares indiscriminately – which earned him a dressing down from Maine’s First Lady of Super-Heroing, Neon Girl, during the crime wave that was going on there – which she believes he may have contributed to.
“Johnny then stepped up and hooked Geek-Girl and Neon Girl up with a mysterious telekinetic called Tyler, who helped them turn things around in their fight against crime… and led Johnny to coming up with the idea of creating a super-team – headed by Geek-Girl!”
Johnson continues, “In the new Geek-Girl TPB, Team Geek-Girl, Ruby Kaye is handed the keys to her new super-hero HQ just as her would-be team-mates make their way there on a plane – but there’s an ‘incident’ during their flight, and they may not all make it!”
Without spoiling things, Johnson says that now that Geek-Girl is an ongoing series, ‘the incident’ is just the beginning of the weirdness that will be coming Ruby’s way – influenced by one of the writer’s favorite comic runs – Grant Morrison’s Doom Patrol. “I love how out-there that series is, and it helped inspire a number of weird and wonderful ideas that I’ve wanted to bring to my comics - and now that GG’s ongoing, I have the right venue for them. Get ready for The Hall of Diamonds; potential arch-nemesis Mean Girl; The Infinite: Limbo’s ‘crazy cousin’ dimension; Cabra Cini: Voodoo Junkie Hitwoman - and that’s just in this first arc alone. Things are gonna get weird and Ruby’s in for a wild ride.”
Collecting Geek-Girl #5-#9 written by Johnson, illustrated by C Granda and colored by Chunlin Zhao, Geek-Girl Vol.3: Team Geek-Girl TPB is Out Now, published by Markosia, and available here or at www.geekgirlcomics.com and www.comixology.com
You can see a four-page preview of Geek-Girl Vol. 3: Team Geek here or at https://samjohnsoncomics.wixsite.com/geekgirlcomics/team-geek

Posted by Leroy Douresseaux at 7:26 AM