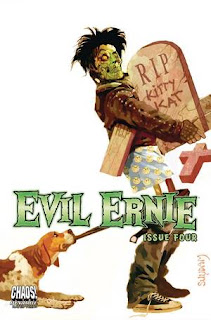 Evil Ernie is now the property of Dynamite Entertainment.  The character gets a new comic book series in Evil Ernie Volume 3.  It is written by Scott Lobdell; drawn by Ariel Medel; colored by Candice Han; and lettered by Dave Sharpe.  The new series focuses on Ernest Gleckman, a good kid who, after being mortally wounded, must “pay down his new lease on life” by serving as a part time fixer for a death cult.  Of course, he must also serve Evil Ernie.

As Evil Ernie Volume 3 #4 opens, Ernest's friend, Candace, is in the killing hands of Evil Ernie.  Candace is momentarily able to summon Ernest so that he can regain control, but Ernie is hard to keep down.  Whoa!

More evil people and beings are arriving by the second.  First, an old rival of Ernie's tries to destroy Potsdam, New York by blowing up the local damn.  Then, the boss of them both arrives...

THE LOWDOWN:  In July 2021, Dynamite Entertainment's marketing department began providing me with PDF review copies of some of their titles.  One of them is Evil Ernie Volume 3 #4, which is the fourth Evil Ernie comic book that I have ever read.

Writer Scott Lobdell has made Evil Ernie Volume 3 not so much a horror comic book as it is a horror-comedy or comic-horror in the tradition of Sam Raimi's “Evil Dead” film series.  Each issue is a delight to read, and Ariel Medel's energetic art and storytelling brings Lobdell's wacky violence to life.  Candace Han's sharp colors make the heaping helpings of gore jump right out at the reader.

I didn't expect much from Evil Ernie Volume 3, but this fourth issue makes me think that it is not only good, but that it might also be a title that could be around for awhile.  The best thing that I can say about Evil Ernie is that I really enjoy reading it.

I READS YOU RECOMMENDS:  Fans of Evil Ernie will want to read Evil Ernie Volume 3.