Comics Review: "SHEENA Queen of the Jungle #4" is an Excellent Fourth Issue 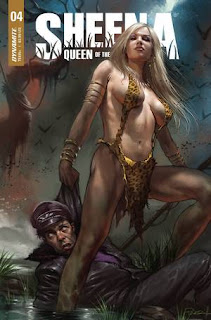 Sheena: Queen of the Jungle, Volume 2 #4 opens with a flashback.  We see how Sheena lost her missing trio of animal friends and what brought her to MegaPark.  Now, those friends are the prizes in a game that involves hunting Sheena.

Meanwhile, in the forest of this biodome/park, Sheena has united with Beatrice Toussaint.  She is the skinwalker who can transform into the giant jaguar that has been killing all the tourists/hunters.  Will they truly unite to fight the men that would kill them?  And even if they survive, they must discover who is really behind the death, the destruction, and all their recent problems.

THE LOWDOWN:  In July 2021, Dynamite Entertainment's marketing department began providing me with PDF review copies of some of their titles.  One of them is Sheena Queen of the Jungle Volume 2 #4, which is the fourth Dynamite Sheena comic book that I have read.

Sheena Queen of the Jungle Volume 2 is one of my favorite Dynamite titles.  The entire creative team:  Stephen Mooney, Jethro Morales, Dinei Ribero; and Taylor Esposito is doing stellar work.  I didn't think that they could top last issue's tale of Beatrice Toussaint, which was was filled with magic and mystery.  But of course, they did.

The action adventure is an invigorating mix of Tarzan and Indiana Jones, and I can never get enough.  If blood and gore are your thing, however, Sheena and Beatrice know how to chop up their opponents.  Dear readers, you will love this comic book.