Comics Review: "ELVIRA: The Wrath of Con" is a Romp of Fun 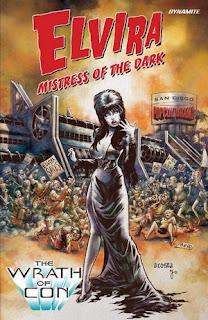 [There is a new Elvira comic book, Death of Elvira, at Indiegogo.]

“The Wrath of Con”

In the early 1980s, actress and model Cassandra Peterson created the “horror hostess character,” known as “Elvira.”  Elvira gradually grew in popularity and eventually became a brand name.  As Elvira, Peterson endorsed many products and became a pitch-woman, appearing in numerous television commercials throughout the 1980s.

Since 2021, Dynamite Entertainment has been running crowdfunding campaigns that go towards producing and publishing special issues of its Elvira comic book series.  Elvira: The Wrath of Con is the second crowdfunded Elvira comic book (after Elvira: The Omega Ma'am) and was successfully funded via a “Kickstarter” campaign.  It is written by Elvira (story) and David Avallone (story-script); drawn by Dave Acosta (pencil and inks) and Jason Moore (inks); colored by Walter Pereyra; and lettered by Taylor Esposito.  The Wrath of Con finds Elvira the honored guest at a major pop culture convention, but not everyone attending is happy to see her.

As Elvira: The Wrath of Con opens, the busty title heroine is watching footage from her latest film, "Elvira: Mistress of the Dark: The Omega Ma'am."  Directed by Hanover Utz, the film is an exaggerated and inaccurate retelling of Elvira's struggle against a cult leader, Rick Circe, and his orange zombies (as seen in The Omega Ma'am).  Known as the “Sudsies,” these zombies were people transformed when they ingested the cleaning product, “Doctor Sudsy.”

Although Elvira and her script doctor, Eddie Mezzogiorno, object to Utz's cut of the film, the director is sticking to his vision.  In fact, he has produced a teaser trailer for the film, and he wants Elvira to screen the trailer at the “San Diego Pop Culturama.”  Elvira is the “Guest of Honor” at the convention, where she will be feted during the “Queen of the Cure” event, which will celebrate her curing the “Sudsies” zombie affliction.

Not everyone is in the celebratory mood, and despite foreshadowing and a warning in the form of an homage to the original Invasion of the Body Snatchers (1956).  Will Elvira avoid doom, and will she find the super … hero (“The Soul Survivor”) that she needs?

THE LOWDOWN:  Writer David Avallone and artist Dave Acosta were the original creative dream team of Dynamite's Elvira comic book launch.  The crowdfunded Elvira comic books are a chance for readers to have them together again.

Honestly, Avallone's Elvira scripts would still be comedy gold no matter who drew them.  By “who,” I mean a professional comic book, comics, or graphic novel artist, of course.  The plots don't matter, although Avallone fashions intriguing plots.  These plots allow him to skewer American culture and pop culture.  He is one of the few modern comic book writers that would be worthy of finding a place on the original staff of EC Comics' Mad comic book.

Here, Avallone attacks anti-vaxx, anti-intellectual, Tea Party, conspiracy-obsessed reactionaries with the same razor-sharp humor and disdain Mel Brooks used on Hollywood Western films, corrupt politicians, and racists in his 1974 film, Blazing Saddles.  However, Avallone never forgets to deliver Elvira's trademark charming wit and delightfully droll humor in servings that are as bountiful as the Mistress of the Dark's breasts.

Dave Acosta is the kind of comic book artist who seems to get everything right.  He is a master at cartooning the human face in an impressive array of emotions and expressions.  The most amazing thing about Acosta's work on this series is that every single time he draws Elvira, both her charm and sexiness comes through.  Jokes about her cleavage aside, Acosta conveys Elvira physical attractiveness in her poses and in the way he … exposes her lovely legs when depicting that treasured split in her flowing black dress.

And, dear readers, in order to enjoy such a special, special edition of the Elvira comic book series, you have to support a crowdfunding campaign.  Only the good people who fund it get to enjoy the goodness that is Elvira: The Wrath of Con.  If you missed out, there is a new campaign.

I READS YOU RECOMMENDS:  Fans of Elvira and of David Avallone's Elvira comic books will want to read Elvira: The Wrath of Con.

[This comic book includes a seven-page “Thank You” section that thanks campaign contributors (of which I am one).]


There is a new crowdfunding campaign for a new Elvira comic book, Death of Elvira.  You can visit the campaign here or at https://www.indiegogo.com/projects/death-of-elvira-comic-book-does-the-unthinkable#/.

Posted by Leroy Douresseaux at 1:07 PM