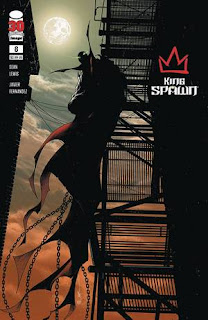 King Spawn is one of three recently launched comic book series that join the original series to form the “Spawn Universe.”  This series is written by Sean Lewis; drawn by Javi Fernandez; colored by FCO Plascencia; lettered by Andworld Design.  King Spawn finds Spawn battling the members of a dark conspiracy that wants to force him to accept his crown.

As King Spawn #8 opens, the Court of Priests attack.  Their leader, Black Azrael, makes his strongest pitch.  Take the “God-Throne,” Spawn!  But Spawn is tired all the crap he has been taking for years.  He wonders: what if he did take the throne?

Later, the story moves to “the Green.”  Simon, a child who was one of the victims of the religious movement, Psalms 137, continues to learn.  He also hears a story about a woman and a renegade angel.  What they left behind in the Green may be close to awakening.

THE LOWDOWN:  King Spawn continues to be the best Spawn spin-off comic book to date.  It is a hybrid of dark fantasy, the supernatural, and superheroes, but the mixture is different with each issue.  Every issue of King Spawn is a surprise, each one stubbornly determined not to be the same as the previous issues simply because they are part of the same narrative.

Writer Sean Lewis continues to bring a rawness and an edge to each issue of King Spawn.  One of the things that he does really well is offer credible villains – adversaries that are not as powerful as Spawn, but that are as determined to get their way as he is.

I love Javi Fernandez's art and graphical storytelling; they are both surreal and fantastic and street level and gritty.  FCO Plascencia's colors are fuel thrown on Fernandez's blaze.  It is as if they want to burn down King Spawn to prove to readers that this comic book is really from Hell.

I'm a believer.  King Spawn is the real, hellified deal.

[This comic book includes “Spawning Ground” the “March Mailbag” of letters to the editor.]

Posted by Leroy Douresseaux at 2:13 PM