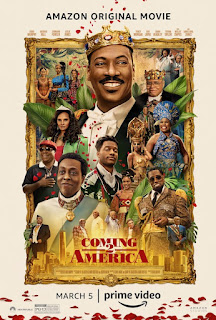 Coming 2 America is a 2021 American comedy film from director Craig Brewer.  It serves as a sequel to the 1998 film, Coming to America.  The film originally streamed on Amazon Prime.  In Coming 2 America, the crowned prince of a prosperous African nation discovers that he has an illegitimate son in America.

Coming 2 America opens in the African nation of Zamunda.  It is the 30th anniversary of the wedding of Prince Akeem (Eddie Murphy) to Lisa McDowell (Shari Headley).  They have three beautiful daughters:  the eldest, Meeka (KiKi Layne); the middle, Omma (Bella Murphy); and the youngest, Tinashe (Akiley Love).

Akeem is summoned before his dying father, King Jaffe Joffer (James Earl Jones), and the King's shaman, Baba (Arsenio Hall).  King Jaffe is upset that Akeem never sired a son, and by Zamundan law, only a male can inherit the throne.  However, Baba reveals that Akeem did indeed sire a son in Queens, New York City when he visited the United States over three decades ago (as seen in Coming to America).  In fact, Semmi (Arsenio Hall), Akeem's best friend and aide, knows the circumstances that led to Akeem conceiving a son with a bar patron.

Akeem and Semmi again travel to America where they meet Akeem's “bastard,” a young man named Lavelle Junson (Jermaine Fowler); his mother, Mary Junson (Leslie Jones), the bar patron; and Kareem “Uncle Reem” Junson (Tracy Morgan), Mary's brother and Lavelle's uncle.  Akeem really needs Lavelle to return to Zamunda with him.  He requires a son who can marry the daughter of General Izzi (Wesley Snipes), the leader of Zamunda's neighbor, Nexdoria.  Izzi is a threat to Akeem and Zamunda, unless the two nations can be united by marriage.  Can Lavelle be the heir Akeem needs, and if so, what about Akeem's eldest daughter, Princess Meeka?

Coming to America remains one of my favorite Eddie Murphy films, topped only the fantastic 1983 film, Trading Places.  Coming 2 America is not so much a sequel as it is a film that acts like a sequel to Coming to America.  The new film is more like one of the TV reunion movies of old 1950s and 1960s television series that used to pop up on network television in the 1970s, 80s, and 90s.  Like them, Coming 2 America gives us our favorite old characters (at least the ones that are still alive) and some new characters, and sprinkles in some cameos, for instance, Morgan Freeman and his famous voice.

As usual, Ruth E. Carter delivers solid gold with her costume design, and the film's production values are marvelous.  The film has a good song score and soundtrack.  There are a lot of funny scenes in Coming 2 America, but overall, the film's narrative drags.  Most of the film takes place not in America, but in Zamunda, although the scenes that take place in America (Queens, NY) pop and are generally fun.

There is not much else to say other than that I really like Coming 2 America as a reunion movie.  I have been a fan of Eddie Murphy and Arsenio Hall for decades, and I am always happy to see them.  So, to be honest, I am happy that Coming to America has a sequel, of sorts, in Coming 2 America.

Posted by Leroy Douresseaux at 1:22 PM