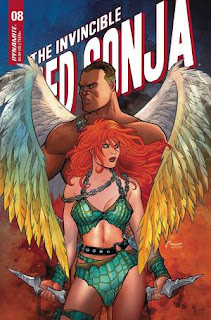 The Invincible Red Sonja #8 opens as Red Sonja and Tuma continue to battle against the warriors and strange creatures of the Darklands.  Although she is able to hold them off for a moment, Sonja and company eventually succumb to their leader, Rok, and his forces.

Then, it is on to the city of Capellia.  Awaiting Sonja there is the living god, Tezzah, and in the god's arena, her son.  To save herself and her friends, Sonja must defeat him.

THE LOWDOWN:  In July 2021, Dynamite Entertainment's marketing department began providing me with PDF review copies of some of their titles.  One of them is The Invincible Red Sonja #8, which is the fifth issue of the series that I have read.

Simply put,  Amanda Conner and Jimmy Palmiotti are killing it.  They not only depict Sonja as the ultimate bad-ass female warrior, but they also pit her against the best adversaries.  It is pure sword and sorcery, and the result is one of the most enjoyable comic books that I am currently reading.  It is raw and funny.  It is violently crazy and crazily violent.

Artist Moritat's plump breasted and heavily muscled Red Sonja will bring all the boys to the yard.  Matt Carter's hue bring the story to life in living color.  The Invincible Red Sonja is a comic book that I must recommend, dear readers, because it is one of the best Red Sonja comic books in years.

Posted by Leroy Douresseaux at 10:55 AM