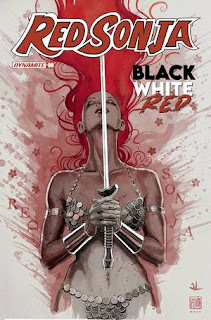 THE LOWDOWN:   In July 2021, Dynamite Entertainment's marketing department began providing me with PDF review copies of some of their titles.  One of them is Red Sonja Black White and Red #8, which is the seventh issue of the title that I have read.

“Last Words” by Dan Abnett, George Kambadais, and Jeff Eckleberry:
The story opens at the house of Master Valik the Merchant.  Burdo, a sword for hire, has brought Valik the coin and jewels of Lady Byros.  The latest mercenary seeking employ is Red Sonja, but first, she has some questions for Valik.  Why are so many smart and savvy men willing to throw away their lives taking on his most dangerous assignments?

Dan Abnett, an underrated comic book writer, has fashioned a clever little gem with “Last Words.”  It is actually easy to figure out Valik's trick, but the trick is in executing this story.  Dan Abnett pulls off that trick, and with George Kambadais' beautiful art, “Last Words” is a winner.

“Fifteen Men on the Sleeper Chest” by Vincenzo Federici and Jeff Eckleberry:
Aboard the doomed vessel, the “Mother of Shipwrecked,” Sonja, known as “the Red Hurricane” is captain.  Sereth, the ship's hub, is deathly afraid because a ship with women onboard is indeed doomed.  When Sonja and her crew land on “Sleeper Island,” fifteen men have survived the perilous journey.  How many of those 15 will make it back to the ship, Mother of Shipwrecked?

Writer-artist Vincenzo Federici has added a touch of H.P. Lovecraft to the sword and sorcery setting of “Fifteen Men on the Sleeper Chest.”  The story is a tense, fear-filled treat, but Federici's art is so busy that it is a little difficult to read the story.  Busy art is clutter in the line of communication between a storyteller and the listener/reader.

“Cursed” by Anthony Marques, Emma Kubert, and Jeff Eckleberry:
The story opens in the snowy forests near the village of Warlington.  An abandoned girl named Agathe shares a cave with Red Sonja.  Together, they also share information about a curse, but what is its true nature?  And how is it tied to Agathe?

Anthony Marques and Emma Kubert offer an enjoyable tale of sorrow and woe in “Cursed.”  “Cursed” is very sad and tragic, but it is expertly executed.  I'd like to see it expanded as a graphic novel, although that is unlikely to happen.

My favorite story from the offerings in Red Sonja Black White and Red #8 is “Last Words.”  “Cursed” is a nice second.