Review: "Jim Butcher's The Dresden Files: Bigfoot Volume 1" - A Boy and His Wizard 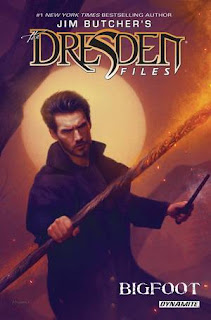 Jim Butcher's The Dresden Files: Bigfoot Volume 1 is an original graphic novel based on “The Dresden Files” series of contemporary fantasy novels and books.  The Dresden Files series is written by Jim Butcher and comprised of 17 novels (as of this writing).  The series focuses on supernatural private investigator and wizard, Harry Dresden, who was introduced in the 2000 novel, Storm Front.

Jim Butcher's The Dresden Files: Bigfoot Volume 1 is the first Dynamite Entertainment Dresden Files original graphic novel since Jim Butcher's The Dresden Files: Dog Men (2018).  It is an adaptation of three Harry Dresden prose short stories:  “I Was a Teenage Bigfoot,” “Bigfoot on Campus,” and “B is for Bigfoot” originally published in anthology paperbacks.  They have been interwoven with new material to create an original graphic novel.

Jim Butcher's The Dresden Files: Bigfoot Volume 1 is written by Mark Powers, adapting the original stories of Jim Butcher.  It is drawn by Joseph Cooper; colored by Salvatore Aiala Studios; and lettered by Dave Sharpe, with a painted cover by Christian McGrath.

Jim Butcher's The Dresden Files: Bigfoot Volume 1 opens with Harry Dresden helping Irwin Pounder and girlfriend, Connie, move into their new apartment.  Harry has known Irwin since he was a kid because three times in his young life, Harry has come to Irwin's rescue, at the behest of his parents – his mother, Dr. Helena Pounder, and his father … known as "Bigfoot."  So now, it is time for Harry to be a storyteller and treat Connie to tales of Harry and young Irwin.

It all begins when Harry travels to the woods of northern Wisconsin.  This is where he meets a being known as “Strength of a River in His Shoulder,” whom Harry will come to call “River Shoulders.”  Humans know people like River as “Bigfoot,” but he belongs to the “Three Stars Forest People.”  It seems Bigfoot had a relationship with Dr. Pounder that produced a child, Irwin Pounder, who looks human like his mother.

Bigfoot has heard that his “scion” is having trouble in school, according to his mother.  Bigfoot sends Harry to Dr. Pounder, and she tells him that Irwin, her “angel,” is coming home from his school, the elite Madison Academy, with bruises.  Using her connections, Helena gets Harry into the school, where he immediately discovers something out of sorts.  Irwin is a good kid, but not everyone at the school is good.

When Irwin is a high school student at St. Mark's Academy, Harry returns a second time to investigate Irwin's mysterious illness.  The diagnosis is “mono,” but it is worse than that.  Someone wants something Irwin has, and they may kill him to get it.

Finally, Irwin is a college student and football player at the University of Oklahoma.  He has a girlfriend, Connie.  What neither Irwin nor Connie k now is that Connie's life and lineage are more complicated than either realize.  And it may cost both their lives.

THE LOWDOWN:  From what I understand, The Dresden Files is detective fiction set in a fantasy world of magic and the supernatural, but I don't know for sure because I have yet to read one of the prose novels.  [Yes, I need to fix that.]  The few Dresden Files comic books that I have read suggests that Harry Dresden is a detective of the supernatural and also an investigator and fix-it man.

Dresden is also apparently a wizard for hire and uses a staff, a blasting rod, and also a .38 revolver as implements of his trade – a mix of magic and practicality.  The great thing about Jim Butcher's The Dresden Files: Bigfoot Volume 1 is that it is a mix of the natural and the supernatural.  Harry uses magic, but often, he solves problems just by being a human – talking and listening; it is as if he is part mentor and part spiritual advisor.  Harry is a problem solver and his brains and wits are on display as much as his wiles and his magic and magical knowledge.

Joseph Cooper's straightforward storytelling captures the sense of love, devotion, and friendship in this story, while not neglecting the dark magics and adversarial relationships and diabolical actions of some of the characters.  The coloring by Salvatore Aiala Studios establishes the moods necessary to both connect these three stories and to also allow each to be different from the others.  Dave Sharpe's lettering sets a steady pace and beat that will carry the reader through this entertaining and smooth jaunt into the supernatural.

Jim Butcher's The Dresden Files: Bigfoot Volume 1 has a good creative team led by Mark Powers clever and delightfully readable adaptation.  My previous experiences with Dresden Files comic books tell me that Jim Butcher's world is a fun one to visit, and this graphic novel will encourage readers to visit it often.  Those who read this graphic novel will be surprised by how much the themes of love and devotion play in the story, and I believe you will like that, dear readers.

Posted by Leroy Douresseaux at 1:50 PM