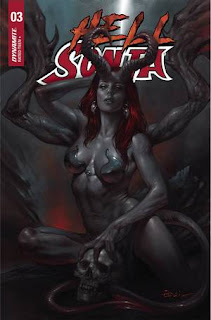 Red Sonja remained a fixture in comic books from then until about 1986.  In 2005, Dynamite Entertainment began publishing comic books featuring differing versions of the character.  One of those is a spin-off title, Hell Sonja.  The series is written by Christopher Hastings; drawn by Pasquale Qualano; colored by Ellie Wright; and lettered by Jeff Eckleberry.  The series focuses on Hell Sonja, who intercepts the prayers of the desperate and then, sends her team of champions to fill Hell's belly with would-be conquerors and those most deserving of its punishment.

Hell Sonja #2 opens in … Heaven?!  Why are the Hell Sonjas leading a raid on Heaven itself?  Is there a war between two opposite realms?

No, the Hell Sonja team of Red Sonja, Blue Sonja, Gold Sonja, and Moon Sonja have taken a mission in a virtual reality paradise for the dead, a planet-sized computer mainframe that keeps digital soul copies happy in perpetuity.  The Heaven Server, however, has been corrupted by “Root Rot,” a living, jacked-in hacker that wishes to rewrite the afterlife to his wishes.  Now, it's up to the Sonjas to wrangle his digital soul before they can pull the plug on his body, dragging both down to Hell!

THE LOWDOWN:   In July 2021, Dynamite Entertainment's marketing department began providing me with PDF review copies of some of their titles.  One of them is Hell Sonja #3, which is one of several Red Sonja-related comic books that I have read

Hell Sonja has turned out to be a bit more than I expected it to be.  Christopher Hastings' scripts are surreal and crazy.  The hereafter as data in a planet-sized computer mainframe is a bit much to simply ignore.  Hastings makes me pay attention; I can say that much about Hell Sonja.  I think this series is hitting its stride at the right time.

Posted by Leroy Douresseaux at 12:01 PM