Comics Review: "THE MAGIC ORDER 2 #5" is the Ultimate Penultimate Issue 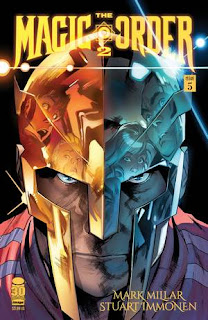 We are now deep into a second six-issue miniseries, The Magic Order 2.  It is written by Mark Millar; drawn by Stuart Immonen; colored by Sunny Gho and David Curiel; and lettered by Clem Robins.  The new series focuses on a magical turf war between The Magic Order and its new leader, Cordelia Moonstone, and a group of Eastern European warlocks whose ancestors the Order once banished.

The Magic Order 2 #5 opens with the story of Francis King and his father, the Lord King.  Then, in the forests outside Bucharest, The Magic Order gathers to battle the warlock Victor Korne and his allies.  This may be the Order's final bid to keep Korne from gaining the last piece of the Stone of Thoth, a talisman from ancient Egypt that summons anything from space, time, and beyond.  But Cordelia and the Order have been a few steps behind their enemies since this conspiracy began, and now, it is worse than ever.

THE LOWDOWN:  As I wrote in my review of the fourth issue:  with each issue, The Magic Order 2 surpasses it predecessor.  That is quite the accomplishment, as the first miniseries, The Magic Order, was and is awesome.

If The Magic Order series is not the best English-language, magical fantasy comic book franchise of the twenty-first century, it is damn close.  In The Magic Order 2 #5, Mark Millar offers a penultimate issue that would make a monster of a final issue.  I may be running out of words to describe how good this series is, but luckily, Millar is not cursed with my deficiency because the words in his storytelling are magic.

Stuart Immonen turns Millar's script into superb comic book storytelling, but what else is new?  Immonen has been an ass kicker in storytelling for ages, so he must be a member of The Magic Order.  David Curiel's lovely colors make the story pop off the page, and Clem Robins' lettering super-charges art and colors that are already super-charged.

Comic book readers who hate good comic books are not reading The Magic Order 2.  Are you reading it, dear readers?