"The Rookie" is a Warm Family Sports Drama 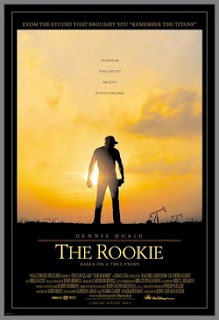 Jimmy Morris’s (Dennis Quaid) perennially losing baseball team made a bet with him. If they won district, he would give his dream of being a Major League Baseball player another shot. Of course they won, and he did try again.

Director John Lee Hancock, a television director and screenwriter (A Perfect World), and writer Mike Rich (Finding Forrester) take the ideas of dreams and wish fulfillment and force them into the harsh light of day in the film, The Rookie. They remind the viewer that getting what you want isn’t always easy, but they have a bigger surprise in store for the viewer. It’s how this film deals with what happens when you get what you want.

In the case of Morris, he does make it to the big leagues (no big spoiler), and the majors is what he expected it to be. It’s just that he had a life and responsibilities before he got his dream job, and now the two conflict. He also discovers that being a big leaguer is a little more complicated than just “playing ball.” Director and screenwriter weave a story and create characters that seem real, because, not only is the story based on real events, the Morris struggle is universal – the desire to do what you want to do and the need to do what you have to do. This is the most intense and heaviest G-rated film in history. The creators still manage to make it fun and uplifting because they encourage us to identify with Morris’s quest.

Quaid gives a very good performance as man navigating his life, between the responsibilities and the dreams. It’s the performance that endears us to him, and Quaid sells us on a story that could have been very down beat. His every gesture, each look into his eyes and his face sells us that the reward at the end is worth the struggle along the way. In Quaid’s Morris, we see that there are rarely ever any pat resolutions to the problems we face in life.

The movie does seem a bit long, and some of the other characters (Morris’s wife and father) should have had more screen time, as they are obviously important to the growth of the character. There’s also a religious element in the film that’s clumsily underplayed. However, The Rookie

does deliver both a message and fine entertainment. One other nice thing that it is subtly played throughout the film – regardless of how tough it is to achieve a dream and no matter how lonely one might feel, there are a lot of people around the dreamer supporting him along the way.