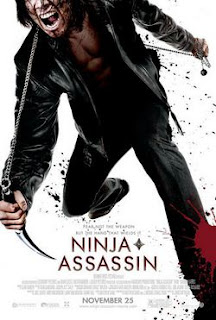 movie. However, if you want to see a ninja movie in which the clichés and bodies pile up in a mass of gore and severed limbs and heads, then, Ninja Assassin is just for you (and me).

focuses on an outcast ninja named Raizo (Rain). An orphan, he was taken from the streets as a child and brought into a ninja clan. There, Lord Ozunu (Shô Kosugi) gave him the name “Raizo” and transformed him into a trained killer in the service of the Ozunu Clan, a secret society whose very existence is considered a myth. After a terrible incident, Raizo leaves the Clan and vanishes. Now, living in Berlin, he waits for his former brethren to come for him, and he prepares to exact his revenge.

Meanwhile, also in Berlin, Europol agent Mika Coretti (Naomie Harris) has stumbled upon a money trail linking several political murders to an ancient network of untraceable assassins from the Far East. In spite of the discouragement she initially receives from her superior, Ryan Maslow (Ben Miles), Mika digs into top secret agency files to learn the truth behind these murders, which leads her to the Ozunu Clan. Mika’s investigation, however, makes her a target of the clan, which sends a team of killers, led by Raizo’s rival, the lethal Takeshi (Rick Yune), to silence Mika. Although he saves Mika from the first attack, Raizo knows that the Ozunu will not rest until both Mika and he are eliminated. Now, Raizo and Mika begin a deadly game of cat and mouse in hopes of finally bringing down the elusive Lord Ozunu and his ninja assassins.

There are things that Ninja Assassin does well and a number of things it doesn’t do that well. The acting is average to mediocre, defined mostly by clunky dialogue, although Naomie Harris (best know for her roles in the second and third Pirates of the Caribbean movies and also, 28 Days Later

) is fair. The Asian cast is pretty good. Rain, a South Korean pop star, as Raizo is charismatic, and Shô Kosugi as Ozunu is dynamite.

The fight scenes are superb; they’ll be magic candy to the ninja-lovin’ kid in you. Too many of them are stage in darkened settings, however. Much of the drama is horridly written; the exceptions are the flashbacks about Raizo’s time training with the Ozunu Clan, which are actually quite good. That aside, what fans want are cool fight scenes, and Ninja Assassin gives us a fight scene just about every five minutes. The hacking and slashing; the severed heads, limbs, and torsos; and the blood sprays will make some viewers wince. I did, but I’ll take many brutal fight scenes in my ninja movie, especially when the alternative is poorly done character drama.