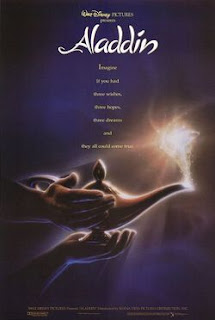 Resourceful “street rat,” Aladdin (Scott Weinger) makes his living on the streets of Agrabah as a thief, ably assisted by his constant companion, a spunky monkey named Abu (Frank Welker). One day his eyes catch the sight of a beautiful young woman, whom he later rescues from an overzealous fruit vendor. Aladdin learns that she is Jasmine (Linda Lavin), the daughter of the Sultan of Agrabah (Douglas Seale), and she is walking the streets of Agrabah in disguise just to experience life outside the Sultan’s palace. Aladdin falls in love with Jasmine, but believes that he must be a prince to win her heart.

Later, Aladdin goes on a mission for another resident of the palace in disguise, Grand Vizier Jafar (Jonathan Freeman), the Sultan’s advisor. It is then that Aladdin comes into possession of a magical lamp. When Aladdin rubs the lamp, out springs the show-stealing Genie (Robin Williams). Genie takes a liking to his new master and uses his magical powers to help Aladdin get closer to Jasmine by disguising him the wealthy Prince Ali Ababwa. However, Aladdin must learn to be himself if he’s going to earn the love of the independent-minded Jasmine, and he’ll need all his smarts to stop the diabolical Jafar and his scheming parrot, Iago (Gilbert Gottfried), from overthrowing the Sultan to become rulers of Agrabah.

. Almost with each successive film, the box office take grew – Beauty and the Beast

in 1992 (while the underrated The Rescuers Down Under

, which at the time set a record for box office gross by an animated flick. The Little Mermaid, Beauty and the Beast and Aladdin are quasi musicals, a sort of “lite” version of a Broadway musical. Of the trio, the most comic is Aladdin.

In some ways, however, Aladdin is old school. The filmmakers and the Disney story department created lively characters with strong personalities and provided each one with sketch comic scenes that helped to endear him or her to the audience. The character animation is superb, and the characters move with fluidity and grace. The animators also provided visual quirks and clever visual gags that further defined each character – the best, of course, being Robin Williams’ Genie. While the other characters are certainly good (Jafar and Iago and Aladdin’s Magic Carpet stand out to me), Williams steals scenes without coming across as a scene hog, and his non-stop antics and transformations make Aladdin such a special movie. Genie was and remains the character that best fits Williams’ manic comic personality, and it’s not William’s effort alone. Genie is a creation of both William’s work as a voice actor and the drawing skills of large group of animators.

When a movie has Williams’ comical madness and Alan Menken’s evocative score and the songs Menken co-wrote with lyricists Tim Rice and Howard Ashman (a frequent partner of Menken’s who died over a year before Aladdin premiered), it has the potential to be a great film. Add in a cast of wonderful and charming characters, a simple, straight forward romance filled with magic and magical creatures, and two deliciously bad, bad guys, and you have a Disney classic.