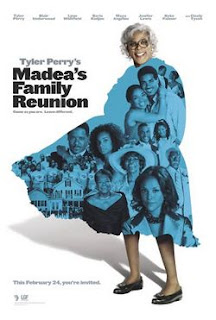 Southern matriarch Madea (Tyler Perry) is normally an unstoppable force, but she finds her hands full with a court ordered foster child, Nikki (Keke Palmer). Then, Madea also has to contend with planning a family reunion. That’s not enough on her plate, however; her nieces, sisters Lisa (Rochelle Aytes) and Vanessa (Lisa Arrindell Anderson), are having relationship problems. Lisa is engaged to marry Carlos (Blair Underwood), a wealthy investment banker who constantly hits and abuses her. Vanessa has finally found a good man Frankie (Boris Kodjoe), but she can’t quite bring herself to trust him no matter how good he is. Most of that distrust is based on her relationship with her and Lisa’s mother, Victoria (Lynn Whitfield), a desperate gold digger who is willing to marry Lisa off to an abusive husband like Carlos just so that he can take care of both Lisa and her. With the family reunion and dark secrets coming out of every clash between Victoria and her daughters, Madea has to use all her tricks to organize the reunion and hope God can cover the rest.

Tyler Perry’s Madea’s Family Reunion is technically a better composed film than the previous adaptation of one Perry’s plays to screen, Diary of a Mad Black Woman. Family Reunion is not as funny as Dairy, although there are lots of laughs, in particularly the scenes between Madea and her foster child Nikki. However, the emphasis here is on the various relationship combinations involving Victoria, Lisa, Vanessa, Frankie, and/or Carlos, and boy, are there fireworks. The combination of soap opera hysteria and melodramatic theatrics is not only over-the-top, but also often just too damn much. The conflicts, feuds, personal demons, etc. may not match up to the commotion that is sometimes real life, but the story here is a bit of a spectacle even for film.

Still, some of it rings true. Tyler Perry’s plays are what’s known by some as “Black Gospel Theatre,” in which characters, mostly poor and working class black folk, beset by all manner of personal setbacks, dilemmas, tribulations, obstacles, etc. have to fight their way out using both inner strength and their faith in (the Christian) God, with an emphasis on both healing and faith. This might put some off, especially those who aren’t particularly religious, but this kind of Christian and prayer oriented African-American drama appeals to many working class Americans, especially blacks, but increasingly whites.

The two film adaptations, like the plays, focus on female characters, but the message is universal. While women make up a large part of Madea’s Family Reunion’s audience, men can find messages and teachings aimed at them. Perry uses Madea as comic relief, but the character isn’t a clown. She spouts wisdom, most of it very practical and useful, between feeding her guests and arguing with Cousin Joe (Perry). This makes the film half-comedy and half-religious inflected drama.

The cast of Family reunion might overact (Lynn Whitfield in particular), and some may not be really good actresses (Lisa Arrindell Anderson), but they make the occasionally overheated drama and often-inflamed dramatics work. It’s palatable; one can feel that Blair Underwood (a very good actor short on work because he’s black) is ready to strike out at anyone who gets in his way. So Madea’s Family Reunion might be a crazy family drama, and it does go overboard; still, its good intentions don’t pave a road to hell, and the movie just works.

Besides, there’s always Madea herself for a good time, and maybe that’s what Madea’s Family Reunion needed – more Madea. I don’t know why playing fat-lady drag appeals to so many black comedians, but like Martin Lawrence in the Big Momma’s House franchise, Tyler Perry does it well. Family Reunion is at its best when Madea is being politically incorrect and giving more mouthy adolescents some good old-fashioned beatings; that would have meant an even better film. So here is one call for more Madea. Maybe next time.