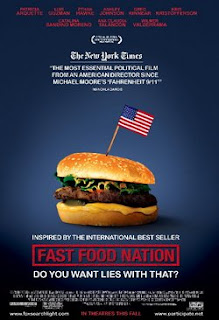 Richard Linklater’s film, Fast Food Nation, is a fictional take on Eric Schlosser’s 2001 best-selling nonfiction book of the same name. Like the book, the film critiques America’s fast-food industry, and the narrative covers everything involved in manufacturing, marketing, and selling hamburgers. Linklater was nominated for the “Golden Palm” at the 2006 Cannes Film Festival for his work in this movie.

The story takes place in and around the imaginary city of Cody, Colorado. It begins with Don Anderson (Greg Kinnear), a hotshot marketing guru at the fictional Mickey’s burger chain. Don arrives in Cody to investigate why there are contaminants in the frozen patties used to make, “The Big One,” Mickey’s best-selling hamburger. His visit takes him inside the bowels of their patty supplier, Uni-Globe Meat Packing, where undocumented workers toil in wretched conditions. As he visits strip malls, ranchers, and suppliers, and people recommended to him, Don doesn’t see nearly all the people who are connected to him and his company. He wonders what his investigation will make of all these perspectives because the fast-food world turns out to be fraught with more peril than he ever realized.

Richard Linklater achieves that rare feat of directing two great films released in the same year: the trippy, animated, sci-fi drama, A Scanner Darkly and the recent socio-political drama, Fast Food Nation. Both films examine flawed, but likeable people caught in larger dramas and dealing with forces of which they have no control or have much less than they think. Both films are at their best when Linklater allows the narratives (and audience) to hang out with an eclectic collection of flawed characters. In that, Nation has some similarities to Robert Altman’s Short Cuts and John Sayles’ Sunshine State.

Fast Food Nation, however, deals with the immediate world in which we live today. While it may seem as if Linklater and his co-writer Eric Schlosser, the writer of this movie’s source, are condemning Nation’s characters to hopelessness, this film is a rallying cry to all of us to wake up about the food we put into our bodies – both the food itself and how and who produces it. Although Nation isn’t merely a message film, it is informing us of our food culture, and Linklater and Schlosser allow the characters to inform us in concise, but rich and vibrant banter and debates.

To that end, the filmmakers assembled a far-flung cast made of one bona fide Hollywood megastar (Bruce Willis), some well-known film and TV stars (Patricia Arquette, Ethan Hawke, and Greg Kinnear), some acclaimed veteran actors, (Luis Guzmán and Kris Kristofferson), and some up and coming young talent (Paul Dano, Ashley Johnson, and Catalina Sandino Moreno). It’s obvious watching these earnest performances that the cast believes in this film, and each actor does his or her point to tie the various sub-plots and storylines together, so rather than something disjointed, we get a coherent multi-layered narrative.

Fast Food Nation will make you think about fast food, in particularly meat: the dangerous conditions in which meat packing workers toil; how the industry obtains these workers and then virtually enslave them; and how the animals that become our food are treated. Perhaps, Nation’s strongest point is revealing again the conditions in which these animals live and what food and drugs they are given. In a matter-of-fact, but engaging visual style, Linklater turns real world news into cinematic art – the most essential and important, important film in years.