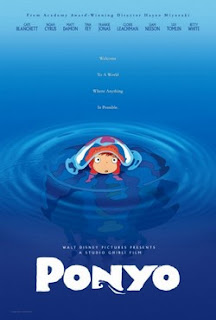 It is a shame that moviegoers have largely turned away from hand-drawn animation (2D animation), but devour computer-animated or 3D animation. Pixar’s 3D feature-length animated films are extremely well written, and DreamWorks is usually pushing the technology of 3D with their films. Still, it is hard to believe that Walt Disney’s The Princess and the Frog cannot out gross something like Cloudy with a Chance of Meatballs and Bee Movie.

American 2D feature-length animation is largely relegated to straight-to-video releases and television, and much of that is actually produced outside the U.S. The malaise at the box office for American 2D animated films means even more trouble for high-quality, 2D animated features from other countries. This is a shame because that means so many people will miss the chance to see a hand-drawn animated, instant-classic from Hayao Miyazaki on a big screen. Miyazaki is arguably one of the world’s greatest living movie directors – live action or animation. He won an Oscar for his animated film, Spirited Away, but his other films are also highly acclaimed. Last year, Miyazaki’s most recent animated film, Ponyo, arrived in the U.S.

Ponyo centers on a fish-girl, named “Brunhilde,” who lives in an aquarium in her father, Fujimoto’s (Liam Neeson) underwater castle. During a trip in which her father takes her and her numerous siblings on an outing in his four-flippered submarine, Brunhilde decides to see more of the world and swims away, only to end up stranded. On the shore of a small fishing town, a boy named Sōsuke (Frankie Jonas) rescues Brunhilde and names her Ponyo (Noah Cyrus).

In spite of her father and his “wave spirits” efforts to stop her, Ponyo grows legs and turns into a human. To become human, however, Ponyo unleashes huge amounts of her father’s magic. When released into the ocean, this magic causes an imbalance in the world, resulting in a huge storm and later massive flooding. Now, only Sōsuke can save the world, but does he know how?

A full-length animated feature can require its animation staff to draw over 100,000 separate images. Yet when you watch a Miyazaki film, you may doubt that humans rather than super computers produced it, and Ponyo

is example of the magic Miyazaki can create through 2D animation. Such scenes as the ocean storms with its seething waves, swelling surfs, and those odd-looking wave spirits are breathtaking in their ability to depict the might and power of the ocean. The night scenes that depict the storms hammering the coast along the small fishing village in which this film is set are simply terrifying. I felt the kind of fear I usually only feel when watching night scenes in horror movies.

To look at Ponyo

, one might think the design of the characters and setting look rather simply, like the art and illustrations one might produce for a daily comic strip. That simplicity in design, however, belies the magic that happens when the drawings are connected to form a “moving picture.” The color, the movement, the visual effects, and the sound come together at the behest of the maestro Hayao Miyazaki, and cinematic magic is a real thing. From the majesty of Ponyo’s mother, Granmamare (Cate Blanchett), to the simple enchantment of a low tide full of prehistoric fish, Ponyo is poetic and has the magic to charm adults and children. I will not stop using the word “magic” to describe Miyazaki’s work, and when you see one of his films, you will see why.