Akeelah and the Bee Spells Wonderful 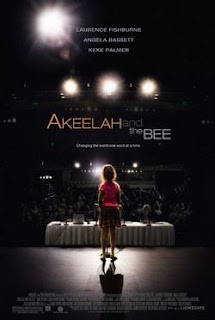 11-year old Akeelah Anderson (Keke Palmer) has an aptitude for words, and after her principal compels her to enter the first spelling bee ever held at her school, Crenshaw Middle School, Akeelah wins. Entering local and regional contests, she places high enough to land a spot in the Scripps National Spelling Bee (a real event broadcast annually on ESPN) in Washington D.C. Despite her own reluctance and her mother, Tanya’s (Angela Bassett) initial objections, Akeelah gets support from her bookish spelling coach, Dr. Larabee (Laurence Fishburne), her principal, Mr. Welch (Curtis Armstrong), and proud members of her community. She even makes a friend of one her rivals, Javier (JR Villarreal), and earns the grudging notice of the previous two years’ runner up at nationals, Dylan Chiu (Sean Michael Afable), who is the boy to beat this year. Now, can Akeelah win?

Family dramas are rarely this good, and if part of the reason that some of us think Akeelah and the Bee is so good is because the movie’s characters are African-Americans in the kind of story and setting that so rarely sees winning black characters, well, the problem is the game, not the players. Combining the best aspects of plotlines involving the against-all-odds, the fish out of water, and the underdog scenarios, Akeelah and the Bee is determined to make the audience feel extra good. It’s a direct cousin of such rousing flicks as Rudy

Though writer/director Doug Atchison can be forgiven for his script’s more mawkish moments, as a director, Atchison trusts his casts to make this uplifting story work. Keke Palmer is puckish as the fiercely intelligent Akeelah, who is struggling to find her place. Laurence Fishburne’s somber turn as Mr. Larabee is spiced by Fishburne’s grave but wise voice, as Larabee guides (Morpheus-like) Akeelah down the path to accepting her gifts and glory. Even Angela Bassett turns a stereotype into a character with whom everyone else has to reckon, and Curtis Armstrong is always a welcomed presence.

Akeelah and the Bee

almost convinces me that I should get into spelling bees, but it completely convinces me of the joy a feel good movie can bring, especially when the filmmakers actually succeed in what they’re trying to sell. It might be hokey how the community rallies around Akeelah, but this would happen in real life. The truth of the matter is that some of us would really enjoy seeing a competitor who shouldn’t be there take on the establishment. As Fishburne’s Mr. Larabee guides Akeelah, his rich voice steering her to her destiny, we’re with him encouraging this lovely flower to bloom. When she wins, the audience wins.