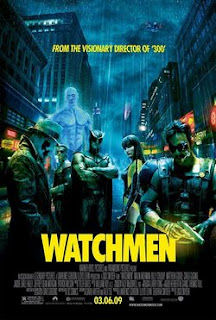 ) and drawn by Dave Gibbons

came to be known as a “graphic novel,” eventually being included in TIME magazine’s 2005 list, “ALL TIME 100 Greatest Novels.”

Various Hollywood figures had been plotting since 1986, the year of the comic book’s release, to turn Watchmen into a film. People previously involved with this project include such names as Joel Silver, Terry Gilliam, Darren Aronofsky, and Paul Greengrass. After numerous starts and stops, Watchmen, the movie, finally debuted in March 2009 and amounted to a large, expensive fart. Warner Bros. Pictures called the film’s director, Zack Snyder (300), a visionary, which must be Hollywood parlance for hack.

is set in 1985 in an alternate version of the United States. The “Doomsday Clock,” which charts American’s tension with the Soviet Union, is permanently set at five minutes to midnight. Tensions between the two superpowers has escalated to the point that they are on the brink nuclear war. Costumed superheroes are also part of this alternate world. In fact, because of a superhero named Doctor Manhattan (Billy Crudup), the U.S. won the Vietnam War. This allowed Richard Nixon (Robert Wisden) to repeal term limits laws and win a third term as President of the United States. By the 1980s, however, the outpouring of anti-vigilante sentiment caused Congress to outlaw superheroes.

The most famous superheroes are the Watchmen. When one of them, the Comedian (Jeffrey Dean Morgan), is murdered, a colleague, the masked vigilante Rorschach (Jackie Earle Haley), sets out to uncover what he believes is a plot by an unknown “mask killer” to kill former superheroes. What Rorschach

uncovers is a wide-ranging conspiracy linked to the other Watchmen: Adrian Veidt/Ozymandias (Matthew Goode), the smartest man in the world who is also self-made super rich; the godlike Dr. Manhattan

; his girlfriend, the ass-kicking Laurie Jupiter/Silk Spectre (Malin Ackerman); and Daniel Dreiberg, the Batman-like Nite Owl (Patrick Wilson). It is a conspiracy that could destroy or save the world.

is mostly a failure as a drama because it lacks emotional resonance. Except for a few moments of the film – the relationship between Dan Dreiberg

and Laurie’s relationship with her mother Sally Jupiter (Carla Gugino), among them – Watchmen

is flat. The characters come across as if they were lead figures being slide across a board game. They are poorly developed and bloated rather than lively.

As an action film, Watchmen lacks the high energy of an action flick because the few action scenes that this movie has feel as if they were dropped in to punch up this contrived screen story. However, such scenes as Nite Owl and Silk Spectre’s rescue at the burning tenement and their mission to free Rorschach from prison are quite good.

pretends to have something to say about the human condition, the state of the world, the manifestation of the superhuman in society, the threat of annihilation, etc., but the film lacks any sociological context. In spite of its references to real world events, the film feels empty, as if its references are more about image than substance. Characters meant to have significance – such as Watchmen’s version of Richard Nixon (played by an actor wearing a ridiculous prosthetic nose) and Henry Kissinger – are just stick figures and caricatures occupying the screen until the main Watchmen characters come back. The filmmakers use songs

and famous recordings by Nat King Cole, Bob Dylan, Simon & Garfunkel, and the Jimi Hendrix Experience, to convey the appropriate socio-political themes and messages, because the script is too retarded to do that.

feels empty. It is like a giant art or creative project that is impressive because of the materials and technical expertise used to make it, but is ultimately devoid of meaning or substance. It is confounding in its emptiness and shallowness and is actually the opposite of cerebral. When it tries to be compelling – especially during the big reveal in the final act – it is laughable. Where Alan Moore and Dave Gibbons original comic book was daring, Watchmen the film is often boring and sadly, disappointingly staged and stuffy. The great original is now an embalmed big budget Hollywood misfire. The few moments of genuine goodness that Watchmen has are not worth watching a movie that is almost three hours long.