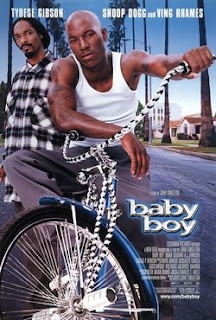 DRAMA with elements of crime and romance

Jody (Tyrese Gibson) is a 20-year-old black man living with his mother (Candy Ann Brown). He is the father of two children by two different women. The relationship with one of the baby mama’s, Yvette (Taraji P. Henson) is the romantic focus of the film. Jody’s mother has an openly sexual relationship with Melvin (Ving Rhames), himself a former banger; he is a muscular Mandingo and Jody’s mother doesn’t have to call Tyrone when she needs some good, strong lovin.’ B’leive ‘dat!

Jody’s homey, Sweet Pea (Omar Gooding) is lost and also unemployed; he is desperate for meaning in and a purpose for his life. As he relationship with Yvette deteriorates, her old flame, a recently released convict named Rodney (rapper Snoop Dogg) shows up, literally gunning for Jody’s life.

Directed by John Singleton (Shaft), Baby Boy is more a slice of social studies than entertainment. It belongs to Singleton’s South Central Los Angeles milieu that he introduced in Boyz N the Hood, but it is thematically similar to the Boyz follow up, Poetic Justice.

The film opens with Jody dreaming that he’s an adult still in the womb; it is a visually jarring set piece that conveys the troubled state of Jody’s mind. It’s not long before we also realize that Jody’s life is frozen. He going nowhere, spending his days hustling, watching television, and involved in sexual escapades with many women.

He resents his mother’s relationship with Melvin, but Melvin is very familiar with the type of “li’l nigga” that Jody is because Melvin was himself once of a similar type. Jody has a twisted view of his relationship with his baby mamas. He tells Yvette that he lies to her about his philandering because he loves her too much to hurt her with the truth that he is a man whore. He uses the other women for sex because they’re, in his words, “tricks,” but he really loves Yvette because she is the mother of his son. His other baby mama, Peanut (Tamara LaSeon Bass), a girl whose own mother seems to be well to do, is less tolerant of Jody and dismisses him. In fact, when his relationship with Yvette collapses, Jody tries to seduce Peanut, but she quickly lets him know that she intends on treating him like an on-call sex toy. For Jody, Peanut treating him like an object jars Jody.

The film has only two characters as fathers – Jody and Melvin; in fact, fathers are conspicuously absent from this film. Melvin is estranged from his own children; his eldest son informs Jody off screen that Melvin beat his mother. Jody isn’t much better; his children are merely vestiges of his fornicating rather than the result of some kind of manhood. Jody’s own father is rarely spoken of, and Jody could have been hatched from an egg for all the knowledge of being a human father he obviously does not possess.
One of the themes here seems imply that Jody can’t be a father because he never had one to show him what it means to be a father and a man. That was Singleton’s dominant theme in Boyz, much to the delight of conservative i.e. Republican critics and fans of the movie. However, if a boy who did not know his own father himself grows to be a bad father, the reason is not necessarily because he didn’t have a dad.

Jody is selfish, spoiled, and manipulative. It’s difficult to tell what part his mother played in his personality, as there isn’t much back-story to her other than that she threw Jody’s older brother out of the house. Someone killed him, and Jody believes his mother throwing the brother out led to that. We also learn that mom has had lots of boyfriends.

As stated earlier, this film is more social studies than entertainment. Singleton seems to be saying to his audience, see how these people are. Or it may be that it is easy for him to make a movie about a subject with which he is very familiar. The film aims at making some kind of point, but Singleton stumbles to a tacked on and predictable ending. Maybe, the film’s resolution is “real” or “how it is on the streets,” but this is drama and it demands some kind of structure and purpose.

Singleton doesn’t have to provide pat answers to solve social “problems.” There are no easy answers to social issues, but the demand for resolutions comes with the territory of making socially relevant films. Singleton overly relies on the visceral impact of profanity-laden dialogue and animalistic, confrontational sex. He’s onto something, having tackled an important issue, but he reduces his movie to a series of blunt, angry scenes. Maybe, he doesn’t know the power and danger of the subject with which he plays. He certainly doesn’t realize the dramatic potential of his subject. He wastes Snoop Dogg’s Rodney character, not to speak of under utilized Ving Rhames.

Boyz in the Hood had a good story that was universal in both its appeals and its themes. Singleton hasn’t been able to duplicate that quality of story since then. He has an idea of how to make really good films, but it’s a shame we have to keep waiting for his arrival as a really good filmmaker. He’ll become one when he takes a social issue and makes a film with a good story that clearly conveys its message to the audience.

Powerful and forceful, Baby boy is a diamond in the rough despite it structural shortcomings. There is enough good there that makes it worthy of considerable critical analysis. It’s a bold, brazen, adventurous movie. While stopping short of being great, it has more substance than most films today, so Baby Boy is worth your time.

Posted by Leroy Douresseaux at 4:18 PM