Review: "Diary of a Mad Black Woman" Funny and True 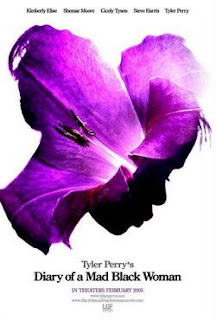 DRAMA/COMEDY/RELIGIOUS (CHRISTIAN) with elements of romance

On the surface, Helen McCarter (Kimberly Elise) seemingly has the perfect life, living in a big mansion with her husband Charles McCarter (Steve Harris), a powerful Atlanta attorney, but even she knows that trouble is also bubbling beneath that same surface. All of a sudden Charles wants a divorce, and he kicks her out of their home on the eve of their 18th wedding anniversary and replaces her with a woman who has, unbeknownst to Helen, had two children for Charles. Helen is forced to return to “the ghetto,” where she finds refuge with the relatives Charles made her give up long ago because they didn’t fit in with his new high, life style. Helen finds solace and some comedy in the tragedy of her life through the insane antics of her pot smoking, gun toting, and much beloved grandmother figure, Madea (Tyler Perry). Helen also reunites with her mother, Myrtle (Cicely Tyson) , meets a new man, Orlando (Shemar Moore), and begins to keep a journal of her trial, tribulations, and recovery – The Diary of a Mad Black Woman.

Tyler Perry has made a name and a fortune for himself (after being homeless early in his career) with his black southern gospel theatre stage plays – six of them going back to 2000. Diary of a Mad Black Woman was first staged in 2001, and a recording of the Diary stage performance became part of a hit DVD series of Tyler Perry stage plays. After Fox Searchlight rejected Perry’s screenplay adaptation of Diary, he submitted it to Lions Gate Film, which green lit the project back in the Spring 2004, and for that we’re lucky.

The quality of the acting is mixed. For instance, Kimberly Elise’s voiceovers are dry, and Tyler Perry’s over-the-top antics, which may work well on the stage (I’ve never seen one of his plays performed live), is occasionally too forced even for the big screen. The script is also a bit dry, but makes some wonderful points about charity, forgiveness, Christianity, love, family, and marriage. Darren Grant’s directing holds the film together even through the clunky bits. However, the film ultimately comes together as a fabulous inspirational look at coming to terms with the trials of life, but most importantly coming to terms with one’s family: the one into which we are born, the ones which adopt us, and the ones into which we marry.

Diary of a Mad Black Woman is inspiring, uplifting, shocking, provocative, and always surprising. The message is familiar, but the ways in which the film gets us there is never dull and 99.9 percent of the time engaging. Although this is a film with a predominately black or African-American cast, Diary is universal and good for all Christian souls, even both the nominal and the sanctimonious ones.