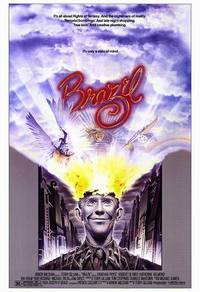 SCI-FI/FANTASY/COMEDY with element of romance

In a dystopian future, an inefficient bureaucracy controls society. Sam Lowry (Jonathan Pryce) is a daydreaming civil servant in the Department of Records (part of the Ministry of Information) who spots an error in a sea of paperwork – an innocent man was arrested and apparently killed because that error mistakenly identified him as a terrorist. In this future, the government expects citizens to pay fines and monetary penalties for their offences against society (the government) simply because even the most minor offenses generate so much paperwork. So the family of the innocent, now-deceased man is owed a refund for the money charged them for his “crimes.” While attempting to deliver the refund, Sam encounters Jill Layton (Kim Greist), and she looks exactly like the woman who is in all his daydreams. In the course of trying to catch up with Jill, Sam incorrectly becomes the object of government’s (via the Ministry) ire, as they assume him to be the mysterious, illegal serviceman and terrorist, Harry Tuttle (Robert De Niro).

Part social commentary, part outrageous fantasy, and black comedy, Terry Gilliam’s Brazil is one of the most dead-on socio-political satires in film history. It so accurately portrays both bureaucratic excess and negligence that it is both uncanny and uncannily timely, especially in light of recent events involving individual citizens being mistaken for terrorists because of their names, nationalities, and/or ethnicities. In fact, the Ministry of Information’s slogan, “Suspicion Breeds Confidence” defines the mentality of post-9/11 America.

The things that make this film excellent are the script and the actors’ ability to interpret its subtleties, while performing amidst the director’s indulgences. Terry Gilliam’s (Time Bandits

) direction is obtuse, and he often seems more enamored with the dressings of his scenario rather than the narrative and allegorical aspects of it. Meanwhile, the cast seems better at bringing Gilliam’s vision to the screen that the director himself. This includes a brilliant performance by Jonathan Pryce as an exasperated everyman who doesn’t realize that he truly is different from everyone one else (kind, considerate, intelligent) and how much that endangers his life. The text (writing) is what makes Brazil

a superb social commentary and an exceptional black comic satire, and luckily the cast acted as midwife to bring the script’s best aspects to screen even when Gilliam meanders.