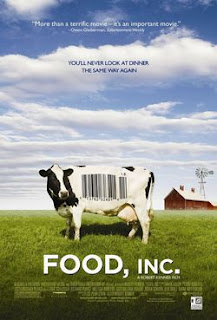 TRASH IN MY EYE No. 19 (of 2010) by Leroy Douresseaux
Food, Inc. (2008)
Running time: 94 minutes (1 hour, 34 minutes)
MPAA – PG for some thematic material and disturbing images
DIRECTOR: Robert Kenner
WRITERS: Robert Kenner, Elise Pearlstein, and Kim Roberts
PRODUCERS: Robert Kenner and Elise Pearlstein
CINEMATOGRAPHER: Richard Pearce
EDITOR: Kim Roberts
Academy Awards nominee
DOCUMENTARY – Food
Starring: Gary Hirshberg, Michael Pollan, Troy Roush, Joel Salatin, and Eric Schlosser
Drawing on the books, Fast Food Nation by Eric Schlosser and The Omnivore’s Dilemma by Michael Pollan, director Robert Kenner’s documentary, Food, Inc., lifts the veil on the food industry in the United States and explores the food industry’s detrimental effects on both our health and our environment.
Food, Inc. explains that a handful of corporations control our nation’s food supply, and these corporations often put their profit and bottom line ahead of their workers’ safety, their consumers’ health, the livelihood of the American farmer, and the wellbeing of our environment. Kenner also spotlights the men and women who are working to reform the industry and change the way Americans think about food. Pollan and Schlosser are among those people. Food, Inc. exposes our nation’s food industry’s dark and highly mechanized underbelly, a side of it that has largely been hidden from the American consumer. The film declares that the food industry has been able to hide its dark side from us with the consent of the regulatory agencies that are supposed to police them, the USDA and FDA. The film presents an industry rife with monopolies, with questionable interpretations of U.S. laws, and with political ties that grants substantial government subsidies to the industry. One of the consequences of the food industry’s practices has been (and continues to be) rising rates of E. coli outbreaks. As evidence of the industries strange and harmful practices and innovations, Food, Inc. offers stories of science-designed food: bigger-breasted chickens, the perfect pork chop, insecticide-resistant soybean seeds, even tomatoes that won't go bad (because of the gas to which these tomatoes are exposed). The film’s scariest bit of information concerns new, drug resistant strains of E coli, the harmful bacteria that causes illness in tens of thousands of Americans annually and is not only being found in meat, but also on raw vegetables sold in grocery stores. I think of Food, Inc. as an important movie, but as far as documentary filmmaking goes, it isn’t particularly remarkable. Food, Inc. is more like an overview covering a wide range of topics, many deserving their own films. For instance, Food, Inc. informs us that the meat processing industry often hires illegal immigrants as labor. That’s not surprising, but the fact that the industry coordinates with immigration officials on ICE raids is. However, Food, Inc. only covers that aspect of the food industry in passing, and when this film does that to other subjects, I can’t help but be frustrated because I want more.
Still, Food, Inc. nourishes our awareness of food industry issues and leaves us hungry for more. This activist documentary may be frustrating, even infuriating at times, but it is successful at grabbing our attention concerning food issues that must have our attention.
7 of 10
B+
NOTES: 2010 Academy Awards: 1 nomination: “Best Documentary, Features” (Robert Kenner and Elise Pearlstein)
Wednesday, April 07, 2010
-------------------------
Posted by Leroy Douresseaux at 11:10 AM