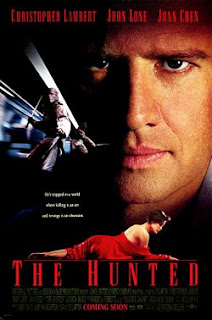 DRAMA/MARTIAL ARTS with elements of a thriller

(which sent Julia Robert’s career into orbit) and Under Siege

(the action film that briefly put Steven Seagal on the A- list), and he created the TV series V.I.P. Thus, he may never be remembered for the film he wrote and directed in the mid-90’s, the so-so Far East martial arts drama/thriller, The Hunted. It’s the story of an American businessman (Christopher Lambert) who witnesses the assassination of a prostitute(?) and earns the ire of her assassin, Kinjo (John Lone), a ninja killer with a rep of legendary proportions. His self-appointed protector is Takeda (Yoshido Harada), a samurai whose family has a centuries old grudge against Kinjo’s clan.

The film is combination of a few things, none of them very well done. Half the film is a low rent martial arts drama and revenge story that borrows Asian customs in the sort of half-assed way syndicated television series do. Basically, an American filmmaker makes a thoroughly mediocre version of what a Hong Kong, Chinese, or Japanese director would make. The other half of the film is a crime drama. A critic in the midst of reviewing the Coen Bros. Miller’s Crossing once said that every American director who aspires to greatness has to do a mob movie or movie about organized crime. This is Lawton’s attempt at it with ninja’s replacing the Irish, Jews, and Italians of American mob pictures.

The really offensive thing about this film is that Paul Racine, the American played by Lambert (of Highlander

fame), ends up saving the day. After nearly two hours of grinding an ancient grudge between Japanese clans, the Westerner ends up the last man standing, and he gets the Japanese girl. I have to admit that I really liked this film the first time I saw it, except for Racine coming out on top, which is politically correct in terms of making big bucks at the American box office. Upon second viewing, I realized that this is a tepid flick that goes on for too long. Although it has lots of potential and a few interesting scenes, The Hunted

struggles just to be an average flick.